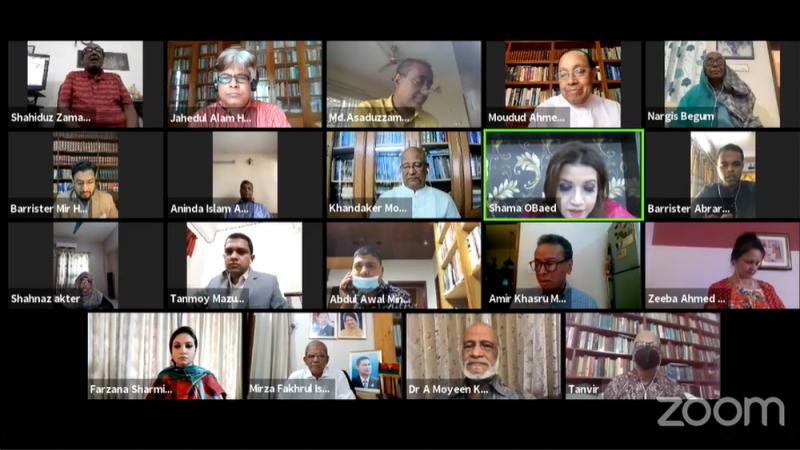 Online desk ; BNP on Sunday urged the international community to take steps for carrying out an investigation into the incidents of enforced disappearance and extrajudicial killing in Bangladesh.

“Over one lakh cases have been filed against 35 lakh people while about 842 were killed and around 603 made disappeared. These figures are based on different documents and reports, but many such incidents remain unreported. So, we don’t have complete information about it,” said BNP Secretary General Mirza Fakhrul Islam Alamgir.

He further said, “We would like to draw the attention of the United Nations and the international community for an impartial probe into the incidents. They should form a judicial inquiry commission for looking into the incidents of enforced disappearance and extrajudicial killing.”

Fakhrul made the remarks at a virtual discussion arranged by BNP, marking the International Day of the Victims of Enforced Disappearances that was observed in the country as elsewhere across the globe today, UNB reports.

He said their party earlier briefed the international community about the incidents of enforced disappearance and extrajudicial killing in Bangladesh and sent a draft list to the UN. “It’s unfortunate that no action has so far taken in this regard.”

The BNP leader said the nation has been going through a tough time as the democracy and the country’s independence and sovereignty are at stake.

“Bangladesh has now completely turned into a fascist and autocratic state losing democracy. We must come out of this situation. Let’s get united putting aside trivia divisions and conflict to overcome the current situation,” he said.

Fakhrul said an investigation is necessary to find out whether any foreign country has any link with the incidents of enforced disappearance and picking up Bangladeshi citizens to their country.

“If it happens, the independence and sovereignty of our country will be endangered. People of this country had liberated the country and established democracy through struggles and they’ll now protect those at any cost” he said.

The BNP secretary general said their party believes people of the country will wake up and carry out a struggle to restore democracy and their all lost rights.

He also highlighted the contributions of their party Chairperson Khaleda Zia to protecting democracy and upholding the country’s independence.

Fakhrul alleged that the current government is least bothered about public sufferings as it ‘usurped’ power using the state machinery. “So, they don’t have any sense of responsibility towards people.”

He said media and civil society members have become vocal against the brutal killing of retired army officer Sinha as he was subjected to extrajudicial killing. “But it’s regrettable that though many innocent people were picked up and killed the same manner for political and other reasons, they and the media didn’t have any voice.”

Senior BNP leaders and the family members of some victims of enforced disappearance spoke at the programme.

The representatives from some foreign missions and international bodies stationed in Dhaka joined the programme.