BNP itself a barrier to democracy: Hasan 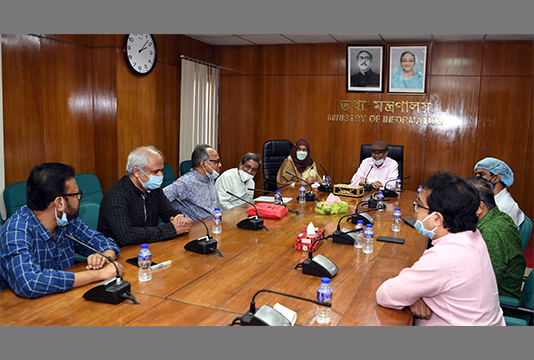 Online Desk : Sharply criticizing a comment of BNP over democracy issue, Information Minister Dr Hasan Mahmud on Tuesday said BNP itself is a barrier to democracy.
“It is now a big question that how much internal democracy BNP has! You can see that BNP will have to rent a hall to hold a meeting for its central committee. I think that it is important for BNP to establish the internal democracy,” he added.

The minister made these comments replying to query of newsmen before holding a meeting with the leaders of Sampadak (editors) Parishad at the conference room of his ministry at secretariat here.

Information Secretary Kamrun Nahar was present in the meeting.

In the meeting, the minister informed that the online versions of the daily newspapers would get priority to online news portal registration.

Terming the meeting as a regular one with the editors, Hasan said, “We always discuss different issues of newspapers and overall issues of media as well. Today, we also discuss about these issues.”

The information minister extended his sincere thanks to the concerned of media for continuing their activities in the prevailing COVID-19 situation.

The government has been providing support to journalists during the coronavirus pandemic as per the directives of Prime Minister Sheikh Hasina, said Hasan, also Awami League joint general secretary.

“I think that the bills would be cleared soon. There are many crises in newspapers in the COVID-19 situation. So that, it will be more useful now, if they pay the due bills,” he said.

He said the Cabinet division earlier has issued a letter to all ministries and departments to release the bills of newspapers and the information ministry has also issued a letter. Now, another letter will be issued to this end, Hasan added.

Noeem Nizam said there is no alternative to the state’s cooperation in progressing the media, especially in the prevailing coronavirus situation.

“The discussion has been fruitful and we sought cooperation to bring the dailies’ online version under registration along with the due bills of the newspapers. And we got assurance of the information minister,” he added.