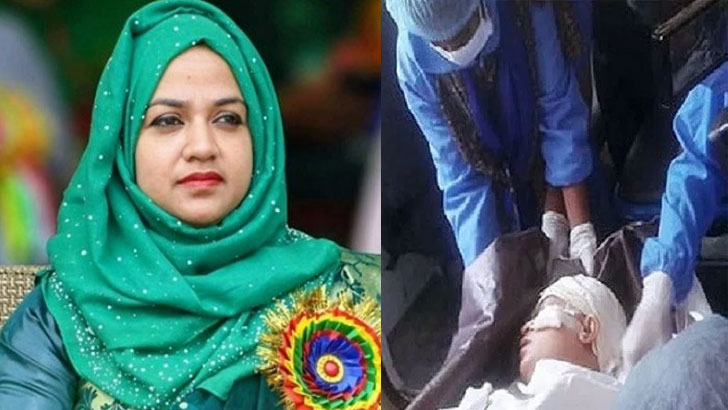 online desk : Two miscreants took part in the attempt on lives of Dinajpur’s Ghoraghat upazila nirbahi officer (UNO) Waheeda Khanam and her father freedom-fighter Omar Ali Sheikh after Wednesday midnight.
However, the law enforcing agencies are yet to know who the attackers were and what their motive was behind the attcack.
On the other hand, locals think that the miscreants carried out the attack without any obstacle owing to the geographical distance between the UNO’s official residence at Osmanpur and Ghoraghat Police Station, which is almost five kilometers.

Examining the CCTV footage of Ghoraghat UNO’s residence, it was found that two persons took part in the attack. One of them was wearing a mask, while the other a personal protective equipment (PPE) so that none could trace them out. They entered the residence one after another and left committing the attack.

Other officials of the administration who went to the spot following the incident told the same thing. Law enforcers are proceeding with the CCTV footage.

Ghoraghat Police Station OC Amirul Islam said CCTV footage showed two people swooped on Waheeda and her father. One of them was seen wearing a mask while the face of another was not clear as he was wearing PPE.

The miscreants entered the official residence of UNO Wahida Khanam on Wednesday night and attacked her and her father Omar Ali Sheikh. Both suffered head and body injuries. It is believed that the incident took place following the previous enmity. They were hit with a hammer or a heavy object.

They were first admitted to a private medical center in Rangpur on Thursday with serious injuries.

Wahida was later airlifted to the National Institute of Neurosciences and Hospital in Dhaka. Her father is undergoing treatment in Rangpur.

It is learned that Omar Ali used to walk every morning. But on Thursday morning he did not go out for a walk from the residence. So his companions went home to look for him. Getting no response from the house, the police were informed. Police arrived and rescued UNO and his father and sent them to hospital.

The guard was locked in a room at the time of the incident.

Dinajpur Deputy Commissioner Mahmudul Alam, Superintendent of Police Anwar Hossain, and other senior officials of the administration rushed to the spot soon after learning of the incident.