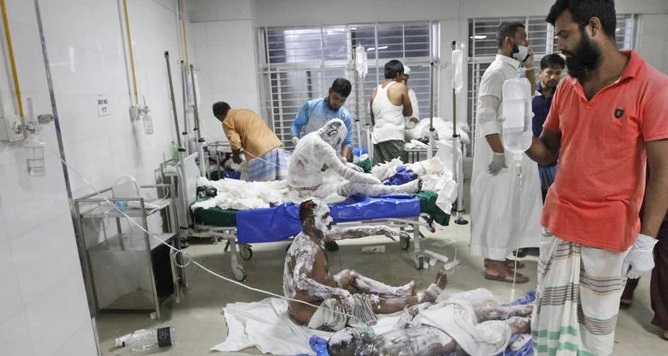 Online Desk : The death toll in Narayanganj mosque explosion reached 20 with the death of imam who was undergoing treatment at Sheikh Hasina National Institute of Burn and Plastic Surgery with multiple burn injuries.
Imam Abdul Malek Nesari, 60, and Mizan, 40, died on Saturday night.

With their deaths, the toll has risen to 20.
Besides, 20 more critically injured patients have been undergoing treatment at Sheikh Hasina National Institute of Burn and Plastic Surgery.

The burn victims died while undergoing treatment at the institute in Dhaka.

Most of the victims are in critical conditions as more than 60 per cent of their bodies suffered severe burn injuries, said health secretary Abdul Mannan.

An underground gas line leakage of Baitus Salat Jame Masjid is suspected as the prime cause of the explosion, said fire service officials.

Locals said that they had complained to Titas Gas Transmission and Distribution Company Ltd officials and the mosque committee about the leakage. But none of them paid any heed to the complaint.

Professor Dr Samanta Lal Sen, coordinator of Sheikh Hasina National Institute of Burn and Plastic Surgery, said that they were treating around 40 victims of the explosion incident.

The institute director Abul Kalm said that 22 more were in critical condition as they had suffered inhalation burns.

The injured are mostly from Paschim Talla area and many families have several burn victims.

The mosque’s imam Abdul Malek was in critical condition and rushed to the burn unit’s intensive care unit, said doctors.

At least 40 people were injured in the gas explosion at Baitus Salat Jame Masjid in Paschim Talla area under Fatulla police station in Narayanganj.