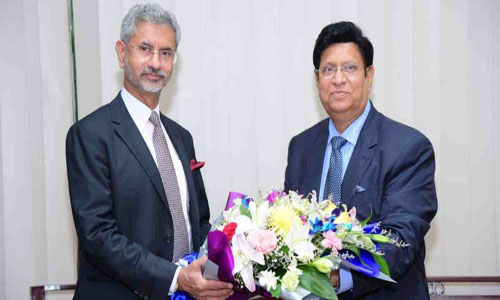 Online Desk : The next meeting of the Joint Consultative Commission (JCC) at the foreign ministers level will be convened shortly this month on a virtual platform to review the entire gamut of bilateral relationship.

“It (JCC) might be held at the soonest this month,” an official at the Ministry of Foreign Affairs told UNB after the telephone conversation in the afternoon.

Dr Jaishankar later tweeted that he had a warm conversation with Dr Momen.

He said they agreed to hold the Joint Consultative Commission (JCC) very soon.

“Will continue to work closely to reach the ambitious goals set by our leaders,” said the Indian Foreign Minister.

Dr Jaishankar assured the Bangladesh Foreign Minister that he would start his visits abroad with Bangladesh once the COVID-19 situation improves.
The JCC will set a roadmap for taking forward the bilateral cooperation to the next level, officials said.

Review on projects will be given importance as a priority issues in the next JCC to expedite the implementation process, said an official.

A high-level monitoring mechanism is likely to be set up to regularly review the progress of the ongoing projects, he said.

The fifth meeting of the Bangladesh-India JCC was held in New Delhi on February 8 last year.

The next FM-level meeting will review ongoing cooperation including the implementation of decisions taken so far including those issues agreed in the last JCC.

During Indian Foreign Secretary Harsh Vardhan Shringla’s recent Dhaka visit, Bangladesh expressed deep concern at the rise in killings at the Indo-Bangladesh border by BSF and Indian nationals during the first half of this year.

Bangladesh flagged that this is in violation of all bilateral agreements and that the Indian Border Security Force must be duly urged to exercise maximum restraint.

The Indian side assured that the BSF authorities have been sensitised of the matter and the issue will be discussed in detail at the DG level talks between BGB and BSF to be hosted by Dhaka in September.

India has become a non-permanent member of the UN Security Council and Bangladesh conveyed its greater expectation from India as a member of the UNSC, to play a more meaningful role for a lasting solution to the Rohingya crisis, including their early repatriation.

In the last few years, Bangladesh and India have “amicably resolved” complex issues including the land and maritime borders, said an official.

The two countries have taken several initiatives to boost connectivity and trade, including the commencement of movement of Indian cargo from Agartala to Kolkata via Chattogram, expansion of the scope of the Protocol that governs trade and transit on inland waterways, India’s gifting of 10 locomotives to Bangladesh, and introduction of parcel and container train services between the two countries.