Bangladesh’s embassy building in Turkey is manifestation of ties: Momen 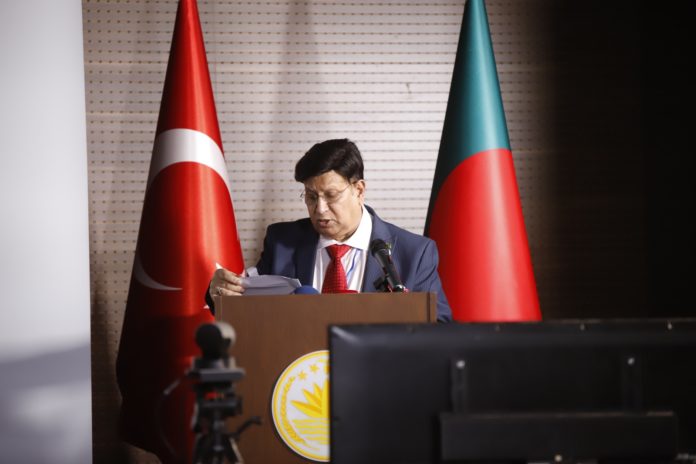 Online Desk : Foreign Minister Dr AK Abdul Momen on Monday said establishment of Bangladesh Embassy’s permanent building in Turkey is a manifestation of importance and priority that Dhaka attaches to its relations with Ankara.

“This building is a testament to the enormous progress we (Bangladesh-Turkey) have made since diplomatic relations between our two countries began in 1974,” he said while speaking at the inaugural ceremony of the newly-constructed Bangladesh Chancery (Embassy) Complex in Ankara.

Prime Minister Sheikh Hasina virtually inaugurated the new complex from Dhaka while Bangladesh foreign minister along with his Turkish counterpart Mevlut Cavusoglu were physically present at the ceremony in Ankara.

“It goes without saying that promoting international peace and ensuring development and prosperity for our people are two key aspects of our cooperation,” he said.

Mentioned that construction of Turkish Embassy’s permanent building in Dhaka has already been complied simultaneously, he said “It was a most welcome coincidence,” he said.

As reflection of Bangladesh’s history of independence, bust of Father of the Nation Bangabandhu Sheikh Mujibur Rahman and Shaheed Minar were also installed at the complex.

Moreover, 36 sqm mural works titled ‘Invincible Bangladesh’ as well as terracotta works on the rural life of Bangladesh was also placed at the complex. The construction of the complex has been successfully completed on September 3 last.