Man who wears wife’s scarf as lungi gets assistance 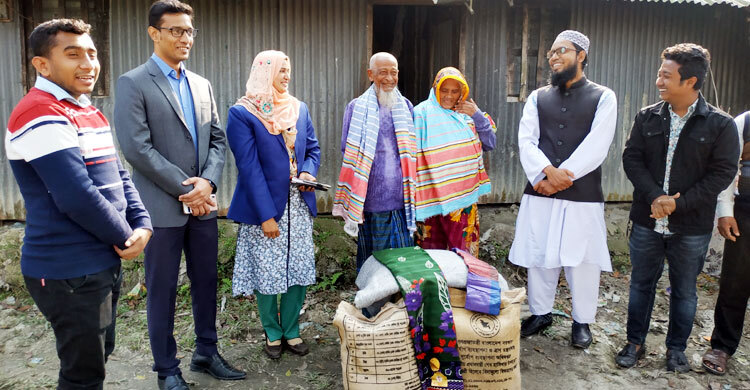 Online desk ; A man who used to wear his wife’s scurf as lungi and was going through a miserable time finally received assistance from others. The story of this elderly couple, residents of Bohalgasia area in Patuakhali municipality, and their struggle drew much attention of netizen after a several reports in this regard published in news portals.

Ninety-five years old Md. Sultan is now living with his wife Sakina Begum,70, in a dilapidated tin-shed house which owned by another person. Everything was okay in the days when he was young and energetic but it becomes hard for him nowadays.

Sakina goes door to door for begging and she is the only earner of the family as his husband too weak to do any work. The couple arranged their food to cook after drying Panta bhat (watered rice) in the sun.

Expressing sorrow over miserable condition, Sultan said, “How will I get a lungi when even failing to manage food for two times? I wear my wife’s scurf because of money crisis.”

“It is my duty to look after wife but instead she takes the charge,” he added.

Sakina said she begs Panta bhat from other houses and dry it in sun. “We cook dried rice of Panta bhat given by the people.”

About old age allowance, she said local member collected the details long time ago but there is no progress of it yet now.
Two sons of the couple do not look after them.

UNO Latifa said they gave assistance to the family soon after the matter came to acknowledgement. They will get allowance, she added.