Constructive criticism is the beauty of democracy: Hasan 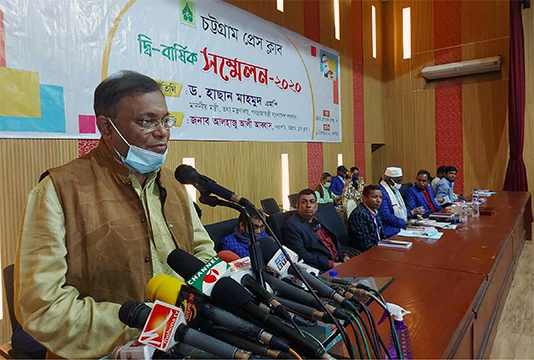 The minister said BNP secretary general Mirza Fakhrul Islam Alamgir is criticising the government in the morning while Rizvi Ahmed is criticising in the afternoon every day.

“Besides, Gayshwar Ray or other BNP leaders are also giving statements against the government. After that, they are telling that they have no rights of talking even after giving statements three times daily”, he added.

“BNP leaders are spreading hatred against the government throughout the day. But, in the evening, they are telling that ‘we have no rights of talking,” said Hasan also Awami League joint general secretary.

He said Prime Minister Sheikh Hasina practices the culture of appreciating criticism. “When I took the charges of Ministry of Environment, I personally nominated a name of a newspaper for the national environment award which satirically published my cartoons on their front page. And they got the award,” he added.

He said there will be criticism if anyone is in the charge and the ministers will have to be the mentality to endure the criticism. Otherwise, a multi-dimensional social system will not be formed, he added.