Relocation of Rohingyas to Bhashan Char not forceful: Dhaka 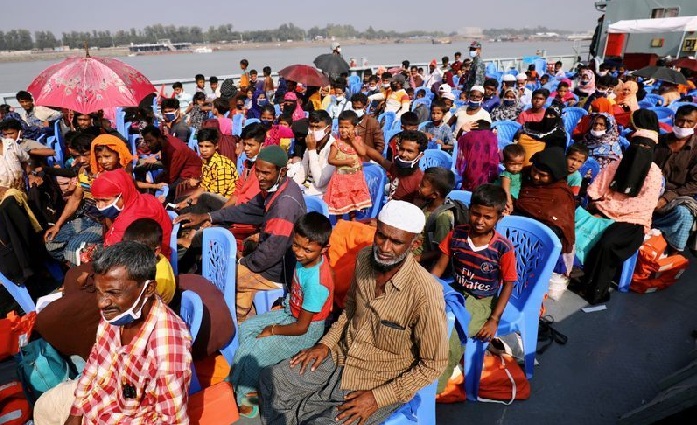 Online Desk ; Bangladesh has said 30-year-old island Bhashan Char is completely safe and suitable for human habitation with all the amenities and there has been no forceful relocation.

“There is no question of the use of force, intimidation or the use of money to influence the decision of the participants,” said the Ministry of Foreign Affairs on Wednesday mentioning different facilities in Bhashan Char like healthcare, drinking water, options for economic activities and cyclone shelters, reports UNB.

The island offers enough space for the free movement of the Rohingyas and Bangladesh Inland water transport corporation (BIWTC) has already introduced regular sea-truck service between Bhashan Char and Noakhali, it said.

Bangladesh said the problem is created by Myanmar and its solution lies solely with Myanmar.

“Therefore, instead of mounting undue and unjustified pressure on Bangladesh, the international community including the UN/INGOs/international humanitarian and human rights organizations must focus on the egregious human rights violations that the Rohingyas have been facing for generations in Myanmar,” MoFA said.

The numerous challenges associated with the temporary hosting of persecuted Rohingyas from Myanmar has compelled the government of Bangladesh to plan relocation of 100,000 Rohingyas to Bhashan Char.

Bangladesh has urged the United Nations to send a technical and protection assessment team to Myanmar to assess the situation of the existing Rohingyas and also see the preparation for repatriation on the ground.

“It should be remembered that Rohingyas are Myanmar nationals. Bangladesh has been hosting them on a temporary basis purely out of humanitarian gesture,” MoFA said.

Any arrangement in Bangladesh for Rohingyas is solely temporary in nature, it said.”Rohingyas want to return to their homeland- Myanmar and all need to work constructively to that end,” MoFA said.

It said: “Now that the election of Myanmar is over, we look forward to visible engagement of the international community with Myanmar for an urgent and early repatriation of these displaced and persecuted Myanmar nationals to their homeland.”

The government made it “unambiguously clear” that the relocation process, which was commenced on December 4, 2020, in line with the GOB’s efforts to decongest and de-risk the camps, strictly followed the principle of voluntariness and was conducted with utmost transparency.

The Rohingyas, who were relocated, decided to be shifted there voluntarily, as was widely reported by the print and the electronic media, it said.

In fact, initially the authority arranged for the relocation of a lesser number of Rohingyas. However, due to increased interest and enthusiasm, eventually more Rohingyas volunteered and participated in the relocation process willingly.

The relocation took place in the presence of representatives of media, civil society and NGOs.

The MoFA said none of them raised any question of coercion or use of force. “Rather, when interviewed, the Rohingyas informed that they were encouraged by the positive reports on Bhashan Char that were shared with them by their relatives who were already in the island.”


It is a known fact that the geographic location of Bangladesh has exposed the country to regular natural disasters like cyclone and flood.

However, MoFA said, the country’s resilience in the face of natural disasters is well-acclaimed. Over the years, Bangladesh has developed effective disaster management system.

For Bhashan Char, it said, much better infrastructure has been put in place involving renowned international companies.

The British firm HR Wallingford was involved in the stability survey of the island.

In fact, the island was developed as per their recommendation and design, MoFA said.

The flood and shore protection measures with 12.1 km long and sufficiently higher embankment designed by the HR Wallingford secures the island from massive tidal waves and cyclones.

This is supplemented by the installation of modern hydrographic monitoring and warning system that can provide early warning on any natural hazards and enable prior evacuation.

“The efficacy and strength of the infrastructure of Bhashan Char and its disaster protection measures have been tested during the deadly cyclone Amphan,” MoFA said.

To address any extreme situation, there are arrangements for evacuation in a timely manner as per GOB’s disaster response management framework.

The government has also ensured sufficient safety measures for the Rohingyas in Bhashan Char. The island is under 24 hr CCTV coverage, MoFA said.

Since the relocation of the first batch, three new births took place in Bhashan Char.

All these three new-born along with their mothers are in good health, MoFA said.

Efforts are also underway to involve the relocated Rohingyas in various activities such as fishing, agriculture and other livelihood activities, MoFA said.

A high-level committee, under the direct supervision of the principal secretary, has been monitoring the activities in Bhashan Char.

The government thanked the CSOs and the NGOs that are partnering with it in its relocation efforts.

The government welcomes and expects involvement of more CSOs to open their operations in Bhashan Char.

“At the same time, the GOB reiterates its stance on the involvement of the UN in the process and is ready to facilitate participation of the UN as per its mandate,” MoFA said.

However, the government is dismayed to see the generation of distorted and misinformation surrounding Bhashan Char and the relocation process, it said.

It is also disheartening that instead of appreciating the good intention of Bangladesh, some quarters have resorted to orchestrating misinformation to create confusion among the international community, it said.