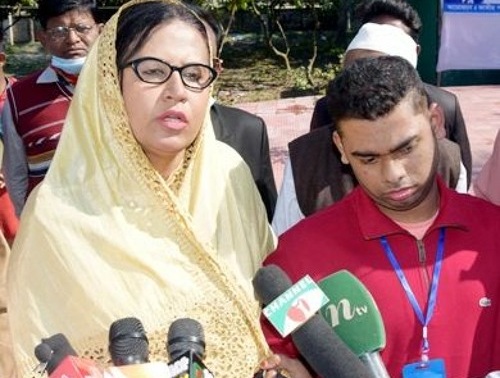 She was talking to journalists after placing wreath and offering fateha at Hussain Muhammad Ershad’s grave at Palli Nibash on Darshana crossing in Rangpur city early Friday afternoon on the occasion of the 36th founding anniversary of the party.

Bidisha Ershad said: “Jatiya Party has gone into life support. In order to bring Jatiya Party back to its original form, I will take Eric Ershad from Teknaf to Tentulia and from Rupsha to Paturia.”

“We will go door-to-door along with contacting with Jatiya Party’s former and present leaders across the country to re-organize the party. We will strengthen the party.”

Expressing regrets, Bidisha said, “In observance of any political party’s founding anniversary, the leaders and workers led by the senior party leaders usually visit the grave of the founder of the party. I don’t know what others do here. In order to fulfil Eric’s wishes, we have come here in Rangpur and offered fateha at the grave of former JP chairman Hussain Muhammad Ershad.”