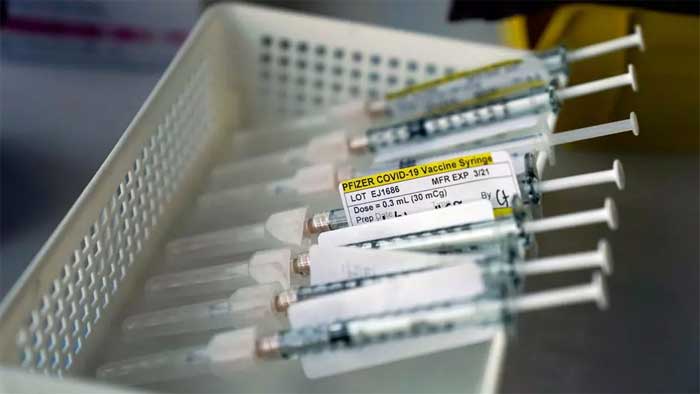 Online desk : German company BioNTech said Friday a preliminary study shows that its vaccine works against a key mutation in coronavirus variants uncovered in Britain and South Africa which experts have said is more contagious than normal coronavirus strains.
Tests have shown that “antibodies from people who have received the Pfizer-BioNTech COVID-19 vaccine effectively neutralise SARS-CoV-2 with a key mutation that is also found in two highly transmissible strains,” said the German company of the vaccine it developed with US group Pfizer.

The B117 coronavirus, which emerged in southeast Britain late last year, has shown to be significantly more contagious—between 40-70 percent—than normal variants of the virus.

Pfizer/BioNTech’s coronavirus vaccine, which is being rolled out around the world, relies on the body’s production of a particular part of the virus—the spike protein—which the immune system then learns to kill.

Because the mutation in the British variant and another South African variant directly affects the virus’ spike protein, there had been fears that it would render the vaccine ineffective against the mutant versions.

But BioNTech said the research carried out by Pfizer and the University of Texas Medical Branch “indicates that the key N501Y mutation, which is found in the emerging UK and South Africa variants, does not create resistance to the Pfizer-BioNTech vaccine induced immune responses”.

Authors of the study itself said however the findings were limited as the mutated variant tested “does not include the full set of spike mutations found on the rapidly spreading strains in the UK or South Africa.”

The research has yet to be peer-reviewed, but experts expressed cautious optimism at the findings.

“This is good news, mainly because it is not bad news,” said Stephen Evans, professor of pharmacoepidemiology at the London School of Hygiene and Tropical Medicine.

“Had the opposite result been found, that the vaccine did not seem to have efficacy against the variation of the virus studied, that would have been bad and very concerning.”

Last month German developer BioNTech said it had the technology to produce a new vaccine against new mutated Sars-CoV-2 strains in as little as six weeks.

Eleanor Riley, professor of Immunology and Infectious Disease at the University of Edinburgh, said there was cause for optimism that mRNA vaccines could prove effective against numerous mutated variants.

“There will be other new mutants and we will need to monitor the situation carefully by repeating this type of study on new variants as they appear,” she said.

“There is a limit to the number of mutations the virus can accumulate and still be able to bind to the (human cell) receptor.”

The EU on Friday said it had struck a deal to double its supply of Pfizer/BioNTech COVID-19 vaccine to a total of 600 million doses.