Independence earned at cost of blood got fulfillment on Jan 10: Hasan 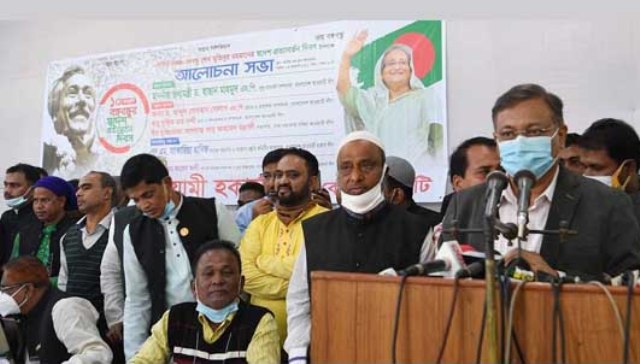 Online desk : Information Minister Dr Hasan Mahmud on Saturday said the independence of the country which was earned at the cost of blood got fulfillment after the home coming of Father of the Nation Bangabandhu Sheikh Mujibur Rahman on January 10.

“Bangladesh achieved victory on December 16, 1971 under the leadership of Bangabandhu. Yet, there was a black spot in the mind of Bangalees despite the delight — when Bangabandhu will come? Finally our independence got fulfillment after the home coming of Father of the Nation Bangabandhu Sheikh Mujibur Rahman on January 10 in 1972,” he said.

The minister made the comments while addressing a discussion at an auditorium of Jatiya Press Club in the city. Awami Hawkers League organized the discussion marking the home coming day of Father of the Nation Bangabandhu.

He said Bangabandhu didn’t go to his family after coming home on January 10. He went to Suhrawardy Uddyan where millions of people were waiting with tears to see Bangabandhu for a moment, he added.

The minister said Bangabandhu, in the human sea, told that the people liberated the country, freed him and he was ready to repay their debt with his own blood. “But, on that day, we couldn’t think that he (Bangabandhu) would be assassinated by the killers on August 15, 1975,” said Hasan, also Awami League joint general secretary.

He said the economic growth of the country was 7.4 percent when Bangabandhu was assassinated. “Even after 40 years of his assassination, we could not exceed that growth rate. Bangladesh exceeded 7.4 percent GDP growth under the leadership of Bangabandhu’s daughter Sheikh Hasina,” he added.

About a comment of BNP leader Rizvi Ahmed over the speech of the premier, the information minister said, “I would like to urge BNP to look into the reports and statistics of IMF, Asian Development Bank and the United Nations on Bangladesh’s progress before criticising blindly and deafly.”