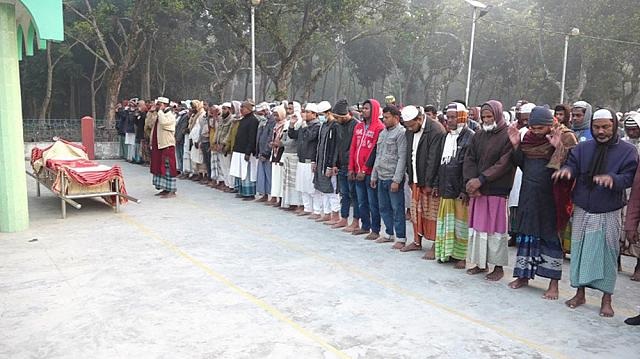 Online desk : Anushka Noor Amin, an ‘O’ level student of Mastermind School in Dhaka who died of rape, was buried at their family graveyard at Gopalpur Eidgah Maidan in Piarpur of Kushtia district on Saturday morning.

She was laid to rest beside her grandparents’ graves after a namaj-e-janaza held at Gopalpur village Eidgah Maidan after Fajar prayers at about 7:00am.

Family members reached Kushtia from Dhaka with Anushka’s body at about 1:00am.

Hundreds of people gathered in front of the victim’s house from the early hours to see her once for the last time.

The neighbours, who took part in the janaza, denounced the heinous murder and demanded capital punishment of the killer.

Later, a group of people formed a human chain on Kamlapur Bazar road demanding exemplary punishment for the culprit involved in the incident.

It was learnt that that 18-year-old Tanveer Iftekhar Dihan, the lone accused, took Anushka to his flat at Dolphin Golli in Kalabagan on Thursday noon alluring Anushka over mobile phone. Then Dihan raped Anushka several times getting her alone in his flat. At one stage of the inhumane rape by the accused, the victim’s vagina and rectum were fractured and she started bleeding profusely, investigating officer of the case filed in this regard said.

As the victim fell sick, the accused drove her to Anwer Khan Modern Hospital to divert the incident where she succumbed to her injuries.

Anushka’s father filed a case against Dihan with Kalabagan Police Station at 1.30am on Friday over sexually assaulting and murdering his daughter.

The incident was proved in preliminary investigation. Besides, the accused confessed his involvement in the rape.