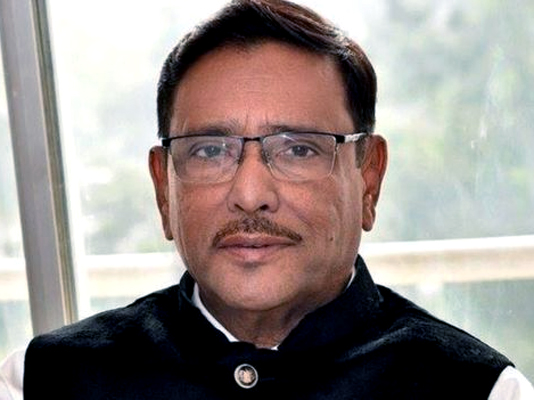 Online desk : BNP has developed a nature of making the development works and good initiatives questionable, said Awami League General Secretary and Road Transport and Bridges Minister Obaidul Quader.
“Those (BNP) who had spread rumors and propaganda at the beginning of coronavirus outbreak are now spreading misleading information about vaccines,” he told a press conference at his official residence on parliament premises on Thursday said, reports BSS.

Quader said Prime Minister Sheikh Hasina has set examples in checking the transmission of coronavirus outbreak, providing treatment to infected people, standing beside the distressed people and keeping the wheels of economy running.

He said as the government has been able to arrange vaccines quickly, BNP is suffering from jealousy.

“Though BNP could not come out from the cycle of making blind criticisms, the government of Sheikh Hasina will be able to complete the vaccination programme successfully with transparency, In-shaAllah,” he said.

About the local government elections, the AL general secretary said those contested in local government or other polls against the party-nominated candidates in the past are not getting nominations from the party and they will not get it in future as well.

Party president’s and Awami League’s stance is very clear to this end, he added.

Quader said those who are now becoming candidates against the party nominated contenders will not have any scope to get nomination of the party in future.

He called upon all the party leaders and workers not to do any work against the party’s interests, otherwise organizational steps will be taken against them.

Quader said Awami League President Sheikh Hasina gave directives to the leaders who were given the charge of eight divisions to resolve organizational problems at different levels.

She also gave directives to hold councils of those organizational units whose tenures have expired to form new committees.