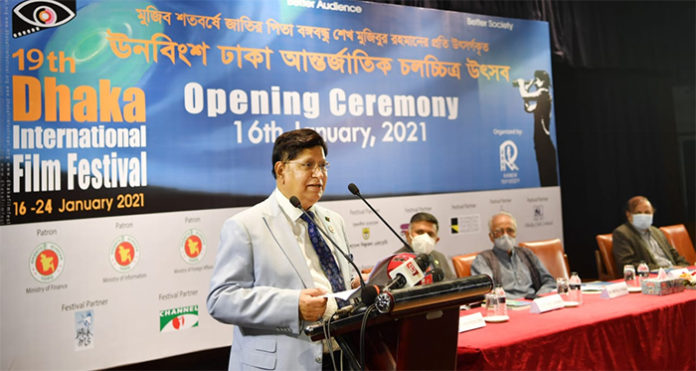 “An ethnic minority (Rohingya) that are the victims of hatred and enmity in a land of Buddhism (Myanmar) that believe in Ohinsho and Nirvana, self-purification where hatred and killing is unthinkable and against his teaching,” he said.

Dr Momen made the remark while inaugurating the 19th Dhaka International Film Festival organized by the Rainbow Film Society at National Museum in the capital this afternoon.

Indian High Commissioner Vikram K Doraiswami spoke as the special guest at the inaugural ceremony of the festival that will screen 226 films from 73 countries.

The foreign minister said films are one of the most poignant and invasive instruments accessible to the humankind for venturing into the realms of the mind, of the memory and of the imaginations that define the “human story”.

“Films depict the art that transcends the boundaries of lives and livings and tell the stories which, often, we are even afraid to tell or look at,” he added.

Noting that the COVID-19 pandemic has inflicted untold sufferings for the artistes, he said the government has reopened the theaters under conditions of health and social-distancing restrictions for the sake of film industry.

Momen hoped that the festival would provide a boost to the country’s film industry, and inspire all the participating artistes to produce even better films in the future.

Lauding that this year festival is dedicated to the birth centenary of Father of the Nation Bangabandhu Sheikh Mujibur Rahman, he said, “It is coming up at a cusp of time when we are crossing over from within the ‘Mujib Year’ to the Golden Jubilee of our Independence.”

The minister recalled with the deepest respect that it was Bangabandhu who had first tabled the bill in the provincial assembly of erstwhile East Pakistan for the formation of Film Development Corporation (FDC) in 1957.

This FDC eventually became BFDC after the independence of Bangladesh -and till today holds and nurtures the principal foundation of Bangladesh’s Film Industry, he said.

“I am also very happy that a biopic on the Father of the Nation, documenting the life and works of the greatest Bengali of all times, Bangabandhu Sheikh Mujibur Rahman’s – a Bangladesh-India joint venture production also commences ‘shooting’ this January, he said.