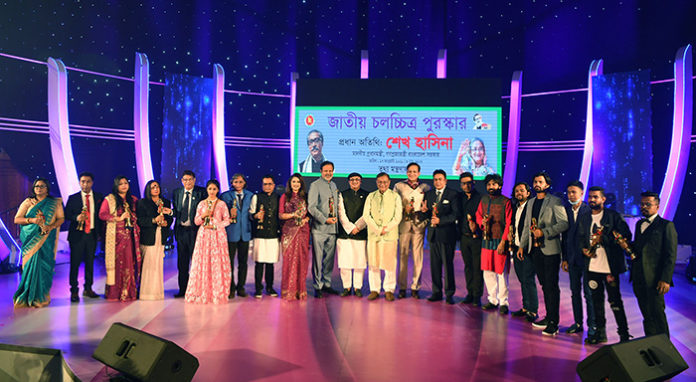 Online desk ; Recalling the contributions of Bangabandhu to the making of the country’s film industry an effective media for social awakening, Information Minister Dr Hasan Mahmud on Sunday said Bangabandhu’s daughter Prime Minister Sheikh Hasina is giving new life to the country’s film industry.
“Bangladesh will reach its dream destination by 2041 under her (Sheikh Hasina’s) dynamic leadership and the filmdom would not only get back its past golden time, but also occupy a dignified position in the global screenland,” he said.

The minister made the comments while giving his speech as the chair at National Film Award-2019 giving function at Bangabandhu International Conference Center at Agargaon in the capital.

The minister expressed his gratitude to the Prime Minister for giving speech at the function by joining virtually from Ganabhaban as the chief guest.

The information minister handed over the awards to the awardees on behalf of the Prime Minister. Foreign Minister AK Abdul Momen and Food Minister Sadhan Chandra Majumder, among others, were present on the occasion.

Hasan said film preserves the contemporary period and it speaks of life. Father of the Nation Bangabandhu Sheikh Mujibur Rahman, realising the impact of films on society, had tabled a bill in the provincial assembly for the establishment of Film Development Corporation (FDC) in 1957 and in continuation to that, the FDC was founded.

He said, at that time, Hindi, Urdu and Indian Bangla films captured the market of Bangladesh. The journey and progress of the film industry in Bangladesh started after the establishment of the FDC by Bangabandhu, he added.

The information minister said a number of timeless cinemas were made and artists were born through the FDC and the movies had played a role in building the movement of independence, struggle of freedom and building post-independent Bangladesh.

He said the present government under the supervision of Prime Minister Sheikh Hasina has taken various initiatives for the industry (film) to bring back the golden days and to capture a dignified position in the global screenland.

“In order to bring back the golden period of the film industry, a special fund of Taka one crore will be formed as per the directive of Prime Minister Sheikh Hasina for the development of the film sector. The government plans to open up closed cinema halls, renovate the old ones and introduce new movie theatres for the movie lovers,” said Hasan, also Awami League joint general secretary.

Besides, he said, cineplexes will also be built in the tathyo (information) complexes approved by the Prime Minister in each district. The premier also formed the welfare trust recently for the film artistes, he added.

Referring to the COVID-19 situation, Hasan said Bangladesh’s position is third among the 22 countries which achieved positive GDP during the pandemic. And, as per a report of Bloomberg, the position of the country (Bangladesh) in combating coronavirus is in top in Asia and 20th across the globe, he added.

Along with this, he said, the Prime Minister has taken initiatives for providing coronavirus vaccine before many developing countries.

Later, a cultural function was held with the participation of Ferdows, Apu Biswas, Mahia Mahi, Saimon Sadiq, Mou and Nusrat Faria, among others. Singer Alak Sen, Apu, Liza and Luipa sung in the function.

The names of the recipients of National Film Awards 2019 were announced in 25 categories.

‘No Dorai’ and ‘Fagun Haway’ movies jointly won the award in the best film category.

Taneem Rahman Angshu was adjudged the best director for his film ‘No Dorai’.

Zahid Hasan was awarded in the best villain category for film ‘Shap Ludu’.