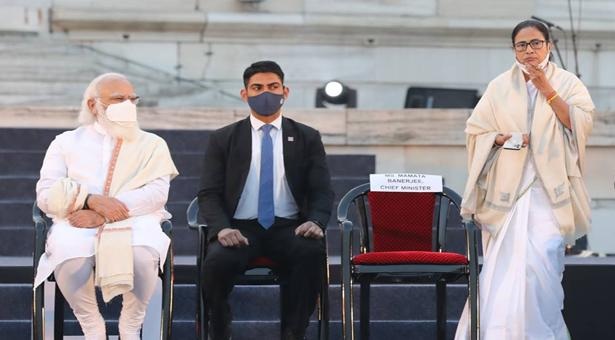 “This is a government programme and not a political programme. There has to be dignity. It doesn’t behove anybody to invite people and insult. I won’t speak. Jai Bangla, Jai Hind,” Banerjee said after a section in the crowd raised slogans against her besides the ‘Jai Shri Ram’ chants, reports The Indian Express.

At the same event, PM Modi said India is following the footsteps of Netaji Subhash Chandra Bose who had dreamt it to be a strong and powerful country one day. “Netaji had dreamt of a strong India; from LAC to LOC, we are following his footsteps,” he said.

PM Modi also said Netaji had once asked people not to lose hope of free India. Similarly, no one can stop India from being Atmanirbhar, he said. “Netaji would have been immensely proud to see India manufacturing own Covid vaccines and also helping other countries,” he added. He also stated that the country has decided to celebrate Netaji’s birth anniversary on January 23.

The prime minister also visited Netaji Bhavan and attended an international seminar on Netaji at National Library where he interacted with delegates and artists.

Earlier in the day, Mamata said her party does not celebrate Netaji Subhas Chandra Bose’s birthday only in the election years, adding that the BJP never celebrated Netaji’s birth anniversary before. She urged the Centre to declare Netaji’s birthday as a national holiday.

Mamata also said India should have four capitals on a rotation basis like the pre-partition era and sessions of Parliament should be held in different locations in the country.

“During the British-era, Kolkata was the capital of the country. I think we must have four capitals on a rotation basis. Why does the country have only one capital? And the sessions of Parliament should be held in different places in the country. We will have to change our concept,” she said.