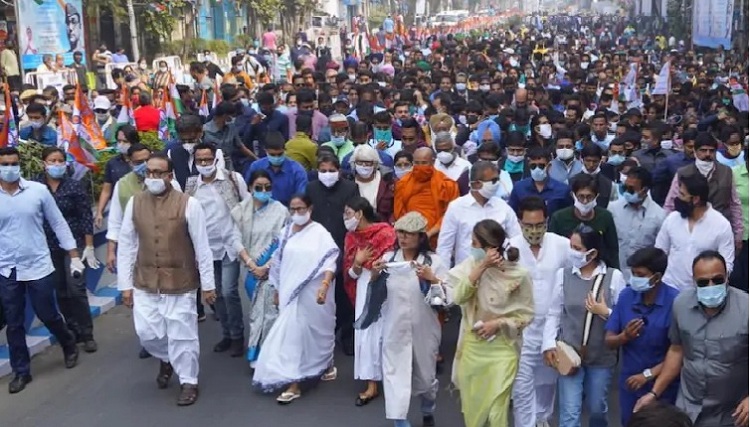 Online desk ; India’s West Bengal chief minister Mamata Banerjee has demanded that India must have four rotating capitals instead of just one national capital in Delhi.
While speaking at a rally in Kolkata on Saturday to mark Netaji Subhas Chandra Bose’s birth anniversary, Mamata Banerjee took to attack the Centre and PM Narendra Modi.

“I believe that India must have four rotating capitals. The English ruled the entire country from Kolkata. Why should there be only one capital city in our country,” said Mamata Banerjee.

Mamata Banerjee took out a major rally in Kolkata on Saturday to celebrate Netaji’s birth anniversary hours ahead of PM Modi’s event to mark the occasion.

On Netaji’s 125th birth anniversary, Mamata Banerjee also demanded that the day be declared a national holiday for the country.

“When Netaji constituted the Indian National Army, he took everyone including people from Gujarat, Bengal, Tamil Nadu. He stood against the divide and rule policy of the British. We will build an Azad Hind Monument. We will show how it will be done. They’ve spent thousands of crores in building statues and a new parliament complex,” said Mamata Banerjee on Saturday.

Mamata Banerjee held a massive rally or ‘padayatra’ from Shyam Bazaar to Red Road in Kolkata to mark the 125th birth anniversary of Subhas Chandra Bose prior to PM Narendra Modi’s visit to Kolkata.