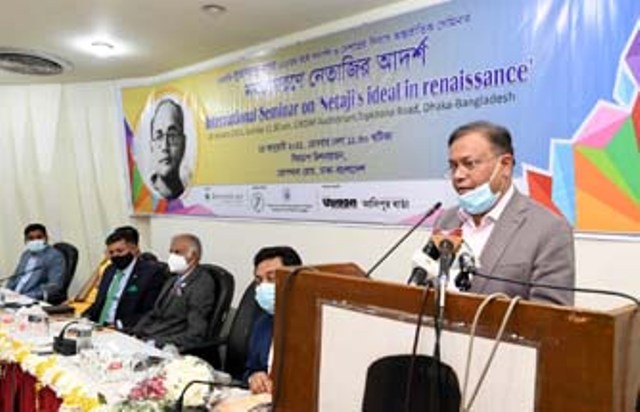 Online desk ; Terming Bangladesh’s friendship with India as most helpful for development, Information Minister Dr Hasan Mahmud on Sunday said the country has some political forces whose main agenda is opposing India.

“The development of the country is not possible by keeping hostile relation with the neighboring country which is surrounding three borders of Bangladesh. Actually, the people, who are doing politics considering opposing India as the main object, are going in wrong direction. Progress lies in friendship,” he said.

The minister made the comments while addressing a seminar at an auditorium of CIRDAP in the capital.

Hasan said the cooperation of India is very helpful in the achieved development and progress of the country under the dynamic leadership of Prime Minister Sheikh Hasina.

He said, “The development of the region will be possible as we (Bangladesh and India) are going ahead with friendship through strengthening the alliance and expanding our regional and people-to-people contacts. And we are working to this end.”

The minister paid rich tribute to Netaji Subhas Chandra Bose and 26,000 soldiers of ‘Azad Hind’ in the independence movement of India.

He said the contribution of Netaji Subash Chandra Bose in the independence movement of the sub-continent will be written in golden letters in the history.

“It is our pride that Netaji was a Bangalee and our Father of the Nation Bangabandhu wrote in his ‘Oshomapto Atmajiboni’ that he was attracted to the leadership of Netaji from his childhood and inspired by him,” said Hasan, also Awami League joint general secretary.

The information minister said the friendship of the two countries has raised a new height under the dynamic leadership of Prime Minister Sheikh Hasina and her Indian counterpart Narendra Modi.

“The 20 lakh vaccines of Coronavirus is a unique example of love and friendship. Many people of India don’t get the vaccine till now, but it (vaccine) has reached Bangladesh. For this, I would like to thank the Indian government,” he added.
The minister also remembered the sacrifice of thousands of Indian soldiers in the War of Liberation of Bangladesh, the than Indian government role in giving shelter to one crore Bangladeshis and earlier Indira Gandhi’s visits to 30 countries for creating awareness in favour of Bangladesh’s independence.

Doraiswami, in his speech, termed the celebration of Netaji’s birth anniversary in Bangladesh as a very touching event and hoped that the close ties between the two countries would be closer in the days to come.