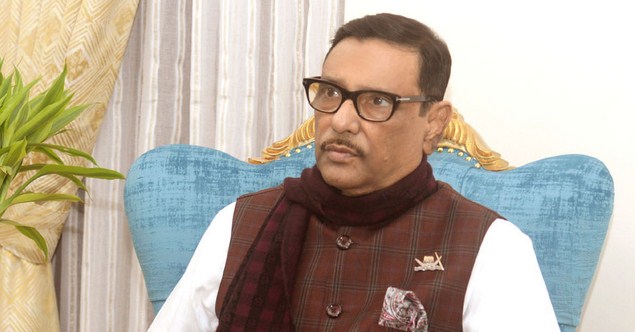 If BNP creates election atmosphere without making evil attempts to make the polls questionable, there could be a possibility for that party to become an opponent of AL, he said.

He made the comment at introductory meeting of AL women affairs sub-committee at the party president’s Dhanmondi political office in Dhaka. He joined it through a videoconferencing from his official residence on parliament premises.

Joining the polls nominally, Quader said, BNP resorted to the path of terrorism to spoil the peaceful election atmosphere.

As a leader of a registered political party of the Election Commission (EC), Mirza Fakhrul’s irresponsible comments over the EC are devoid of decorum.

Obaidul Quader called upon the AL leaders and workers to abide by the party discipline and rules in doing politics.

“Organizational steps will be taken, if anyone is found involved with wrongdoing by using party identity,” he said.

Mentioning that a person cannot get post in more than one committees of the party, Quader said if anyone holds position in any associate bodies, he or she will have to resign from previous post to get new position in any committee.

He said Prime Minister Sheikh Hasina’s government is a woman-friendly government after the post-1975 period.

The government has taken tougher stance against violence on women in the recent period, he said, adding that the door of AL will remain closed for those who will be found involved with repression against women.

The minister urged all to come forward in taking ahead all sorts of women-friendly programme for the betterment of the country.