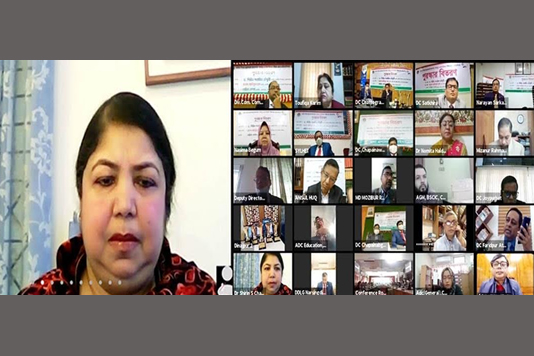 Online desk ; Speaker of the Jatiya Sangsad Dr Shirin Sharmin Choudhury on Saturday said that newly built 70,000 houses for homeless and landless people through Ashrayan project is a unique milestone in establishment of human rights.

“I give a round of applause Prime Minister Sheikh Hasina and her government for inaugurating the Ashrayan project aimed at rehabilitating homeless, landless people of the country, providing them with well-constructed houses with basic facilities…it is a unique milestone in establishment of human rights,” she said.

She was speaking as the chief guest at a virtual prize giving ceremony of an essay competition titled ‘Bangabandhu and Human Rights’ organized by the National Human Rights Commission (NHRC) to mark the birth centenary of the Father of the Nation, said a press release.

“Bangabandhu Sheikh Mujibur Rahman, the father of the greatest Bengali nation of all time, was a strong voice for the oppressed and deprived people By involving the young generation with the ideals and philosophy of Bangabandhu, who must be motivated for future leadership,” she said.

Expressing hope that such an event would spread Bangabandhu’s ideology and philosophy among the young generation, she said, “Bangabandhu’s daughter Prime Minister Sheikh Hasina has taken various activities to implement Bangabandhu’s philosophy, with basic objective to establishing Bangladesh as Bangabandhu’s ‘Sonar Bangla’