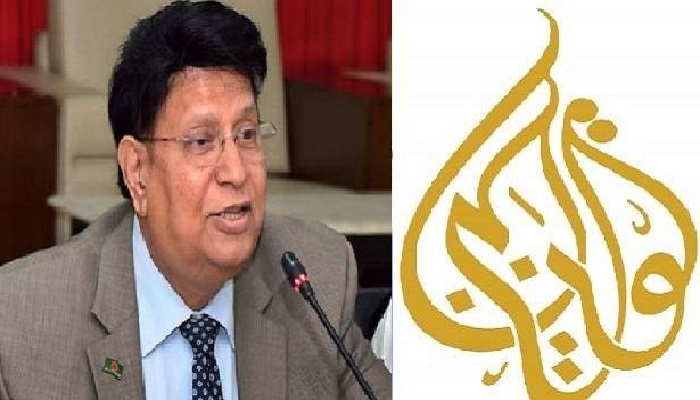 “We’ll try to take legal steps. We’ll look into that. We can take legal action where misinformation is provided. Let’s see,” he told reporters at his office at the Ministry of Foreign Affairs.

Citing an example, the Foreign Minister said Prime Minister Sheikh Hasina had never appointed anybody as her bodyguard when she was an opposition leader but now there is a Special Security Force (SSF).

He said showing photos of two individuals the Al Jazeera report claimed them to be bodyguards of Sheikh Hasina. “This is not true. It’s a complete lie. She never used bodyguards.”

Dr Momen said if someone is seen behind Sheikh Hasina nobody can say he is her bodyguard. “Even during the August grenade attacks on her, leaders and party men protected her, not any bodyguard.”

“It has lost its credibility for airing false news. It’s very sad indeed,” Dr Momen said adding that they heard that Al Jazeera does it by taking money.

He said it is very regrettable that Al Jazeera did such a report and they should apologise for this.

The Foreign Minister said many cannot accept the rapid development of Bangladesh, even during Covid-19, Bangladesh performed very well in the field of economy.

“They don’t like Bangladesh’s achievements. This is jealousy,” he said there are examples that this channel aired motivated news targeting Muslim countries.

Asked whether Bangladesh will shut down the channel for Bangladeshi viewers, Dr Momen said they have no such a plan as the world is open. “We hope Al Jazeera would be more responsible.”

Earlier, the government of Bangladesh rejected the desperate “smear campaign” instigated by extremists and their allies, working from London and elsewhere through Al Jazeera report.

The government also regretted that Al Jazeera allowed itself to become an instrument for their malicious political designs aimed at destabilizing the secular democratic government of Bangladesh with a proven track record of extraordinary socio-economic development and progress.

The Ministry of Foreign Affairs (MoFA) said the government of Bangladesh has learnt of a false and defamatory report titled “All the Prime Minister’s Men” by Al Jazeera news channel.

The report is nothing more than a misleading series of innuendos and insinuations in what is apparently a politically motivated “smear campaign” by notorious individuals associated with the Bangladesh Jamaat-e-Islami extremist group, which has been opposing the progressive and secular principles of the People’s Republic of Bangladesh since its very birth as an independent nation in 1971,” MoFA said in a statement on Monday night.

The fact that the report’s historical account fails to even mention the horrific genocide in 1971 in which Jamaat perpetrators killed millions of Bengali civilians and raped more than two hundred thousand Bengali women, is but one reflection of the political bias in Al Jazeera’s coverage and that of its principal commentator, David Bergman, convicted by International Crimes Tribunal Bangladesh for challenging the official death toll of 1971 Liberation War, it said.

It is noted that the main “source” of Al Jazeera’s allegations is an alleged international criminal claimed to be a “psychopath” by Al-Jazeera itself.

“There’s not a shred of evidence linking the Prime Minister and other State Institutions of Bangladesh to this particular individual, and it is highly irresponsible for an international news channel to draw conclusions on the basis of the words of a mentally unstable person,” MoFA said.

It is also not surprising that the report aligns with the string of anti-Bangladesh propaganda habitually orchestrated by a few convicted absconding criminals and discredited individuals patronised by Bangladesh Jamaat-e-Islami, which on certain occasions have conspired with international extremist groups and news media specially the Al Jazeera, the statement reads.