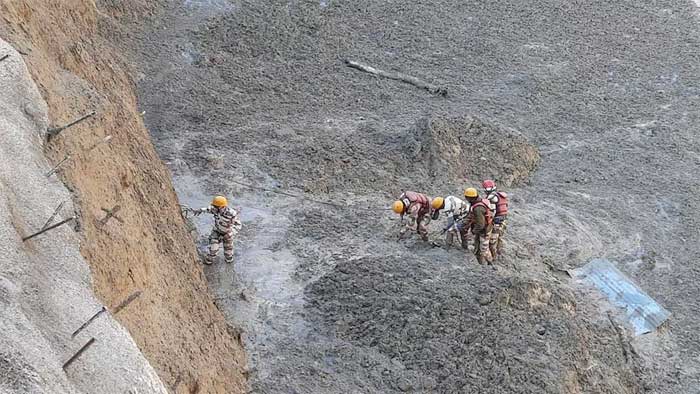 online desk ; Three people were confirmed dead and at least 150 were missing in northern India after a broken glacier caused a major river surge that swept away bridges and roads on Sunday, police said.
The massive burst of water tore through the Dhauliganga river valley, destroying everything in its path, videos taken by terrified residents showed.

Three bodies had been found and a desperate search was underway for more, police said, and efforts are underway to clear villages in the stricken region of Uttarakhand state.

“We have located at least three dead bodies on the river bed,” a police spokesperson in the state told AFP.

“Our last update puts the missing persons number at 150, and there are 16 or 17 persons trapped inside a tunnel.”

Most of those missing were at the Tapovan power plant next to a dam that was breached by the surge.

Emergency workers were desperately trying to reach about 17 people trapped inside a tunnel at the complex that had been filled with debris.

Scores of mobile phone videos shared on social media showed the massive burst of water tearing through a narrow valley below the power plant, leaving roads and bridges destroyed in its wake.

Most of the villages being evacuated are on hillsides overlooking the river, which is a tributary of the Ganges.

“The district administration, police department and disaster management have been ordered to deal with this disaster,” Uttarakhand chief minister Trivendra Singh Rawat said on Twitter.

“India stands with Uttarakhand and the nation prays for everyone’s safety there,” he said on Twitter.

Authorities emptied two dams in a bid to stop the flood waters reaching the Ganges at the towns of Rishikesh and Haridwar, where authorities have barred people from going near the banks of the sacred river, officials said.

The flash floods have caused damage to a dam next to the Rishiganga power plant and other infrastructure, Neeru Garg, a senior police officer in the region, told A .