BNP chooses path of conspiracy being isolated from countrymen: Hasan 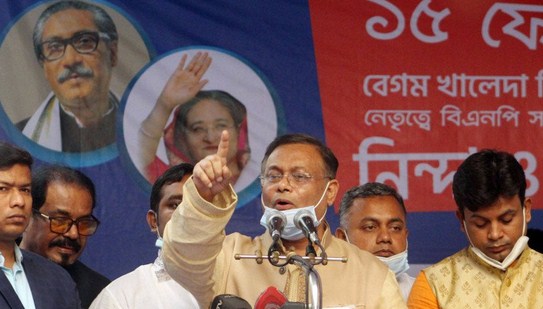 Online desk : Information Minister Dr Hasan Mahmud on Monday said it seems from the statement of BNP leaders that they have already chosen the path of conspiracies after being isolated from the mass people of the country.

“The enemies (BNP) chose the path of conspiracy against Bangabandhu after they had failed to combat him politically. In that way, BNP is now out to hatch conspiracies after becoming unsuccessful in combating Prime Minister Sheikh Hasina politically,” he said.

The minister made the comments while addressing a protest rally at Bangabandhu Avenue in the capital. Dhaka South City Unit of Awami League arranged the rally protesting the election held on February 15, 1996.

Criticising a comment of BNP leaders over toppling the ruling government, Hasan said there might be two reasons behind their remarks. One is that they have been involved in conspiracies against the government for the last 12 consecutive years like the way they hatched conspiracy against Father of the Nation Bangabandhu Sheikh Mujibur Rahman.

About the rally of BNP, the minister said if the gathering of hundreds of people in Dhaka city out of about two crore people is a huge gathering, then the world is getting smaller for BNP. And it is necessary to understand how isolated they are from the people, said Hasan, also Awami League joint general secretary.

Congratulating BNP leaders for taking COVID 19 vaccine despite spreading propaganda against the vaccine from the very beginning, the minister said BNP leaders should take the vaccine as the government needs strong opposition.

Mentioning that Begum Khaleda Zia had tried her level best to retain the power by conducting voter-less election on February 15, 1996, he said, “But they were able to retain state power only for one and a half months.”

Hasan said the mass people of the country said them (BNP) ‘goodbye’ through movement and choose Bangabandhu’s worthy daughter Sheikh Hasina to form the government through election.

He said BNP is now talking about elections-democracy while the party was born at Cantonment. Most of their (BNP) leaders are from other parties who joined the party (BNP) for money like football-cricket teams, Hasan added.