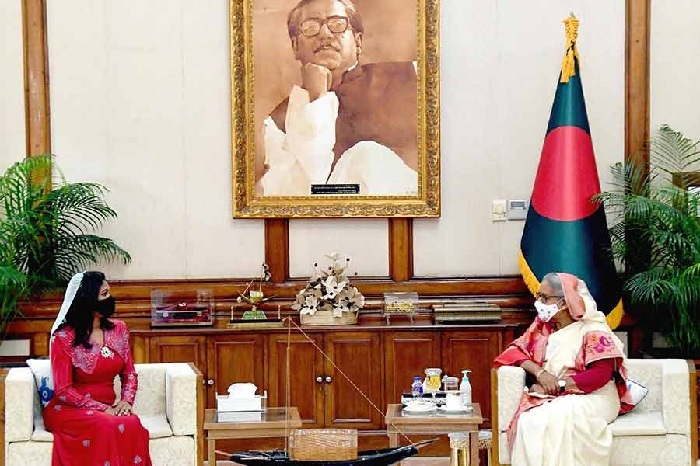 Online desk : Prime Minister Sheikh Hasina on Wednesday said sea cruise services can be introduced between Bangladesh and the Maldives during the winter season.

The premier said this while the High Commissioner of the Maldives to Bangladesh Shiruzimath Sameer paid a courtesy call on her at her official Ganabhaban residence in the capital, reports BSS.

The Prime Minister also stressed the need for exchanging experience and assistance between the two friendly countries in collecting fisheries in the deep sea.

In response to the issue, the High Commissioner said a memorandum of understanding (MoU) may be signed during the visit of her country’s president to Bangladesh on the occasion of celebrating the Golden Jubilee of Bangladesh’s independence.

Sheikh Hasina urged the Bangladeshi nationals residing in the Maldives to take the Covid-19 vaccine.

To this end, the High Commissioner said her country has already started vaccination of the labourers working in the Maldives as they have been playing a significant role in the socio-economic advancement of the country.

Shiruzimath Sameer informed Sheikh Hasina that students of the Maldives have been pursuing medical sciences in Dhaka, Chattogram and different parts of the country.

The Prime Minister said her government is giving vaccines to the teachers first and then they will vaccinate the students.

Mentioning that her government has established engineering universities and colleges, medical college, aviation university, maritime university in Bangladesh, she urged Maldivian students to come to Bangladesh in large numbers for study purpose.

The Prime Minister called upon the businessmen of the Maldives to make investment in agriculture and agricultural goods, leather and leather goods, ceramic, medicine and information technology sectors alongside fisheries.

The High Commissioner of the Maldives has expressed her country’s keen interest to increase trade and commerce with Bangladesh. She has sought investment from Bangladesh in a new city being built at Male Island.

Briefly spelling out the success in agriculture, Sheikh Hasina said that the agricultural production in Bangladesh has been increasing day by day.

Despite the fact, Bangladesh has to import foods as it has to distribute huge foods and face several flooding during the Coronavirus pandemic, she added.

The High Commissioner of the Maldives highly praised the Prime Minister for her visionary leadership alongside her role and initiatives in facing the situation arising out of the coronavirus.

The Prime Minister said that the entire world has been suffering from the coronavirus pandemic while her government has tried its best to face it.

Shiruzimath Sameer expressed her gratitude on behalf of her country as Bangladesh has given donations to the Maldives in a very difficult time.

The High Commissioner described their location of Rohingyas to Bhashan Char as a good gesture.

In this connection, the Premier said that Rohingyas have been living in Cox’s Bazaar in a very inhuman condition while the forest and environment of the locality has been destroyed immensely.

“We have arranged better and modern accommodation for the Rohingyas at Bhashan Char. We will develop the entire area,” she continued.