Cairo to continue support to Dhaka over Rohingya crisis 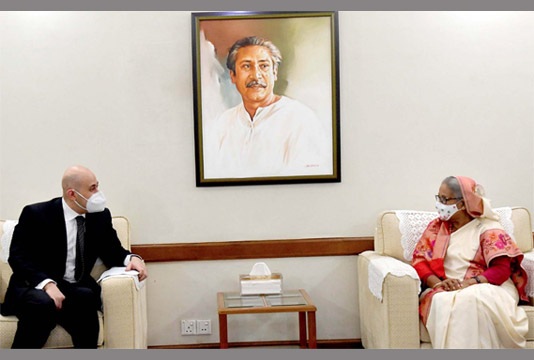 Online desk ; Egyptian Ambassador in Dhaka Haytham Ghobashy on Wednesday assured Prime Minister Sheikh Hasina his country would continue to stand by Bangladesh over the Rohingya crisis as he paid a courtesy call on her at the premier’s official Ganabhaban residence in Dhaka, reports BSS.
“The newly appointed envoy said Egypt will continue its support to repatriate the forcibly displaced Rohingyas to their homeland in Myanmar,” a premier’s office spokesman said after the call on.

The premier said her government was trying to implement Father of the Nation Bangabandhu Sheikh Mujibur Rahman’s dreams, following his development plan.

According to the spokesman Ghobashy said Dhaka-Cairo relations were based largely on trade and commerce while there were some unexplored fields of mutual cooperation to strengthen further the bilateral ties.

The ambassador said his country could extend its support to Bangladesh in ensuring safe water supplies, dam and barrage constructions as well as promotion of tourism while Egyptian businesses could relocate their plants in Bangladesh to expand bilateral business relations.

He also laid emphasis on exchange visits of trade bodies and businessmen to boost bilateral trade and commerce.

Sheikh Hasina welcomed the idea of setting up Egyptian units, saying the entrepreneurs there could do it in special economic zones in Bangladesh and informed the envoy that her government planned to develop an exclusive tourist zone in Cox’s Bazar for foreigners.

She told the envoy that Bangladesh is lucrative site for foreign entrepreneurs who could set up business here eying a huge South Asian market in particular.

Tusher said the envoy proposed that Bangladesh could be an observer in “Eastern Mediterranean Gas Forum” where his country has a major stake for cooperation over natural gas usage.

Tusher said the premier also discussed with the envoy about threats of international terrorism and pointed out her government’s “zero tolerance” policy against the menace while Ghobashy said Egypt was willing to establish collaboration with Bangladesh in combating militancy.

Sheikh Hasina said there is no room of terrorism in Islam and told the envoy that her government was constructing 560 model mosques across Bangladesh to help spread the real messages of Islam.