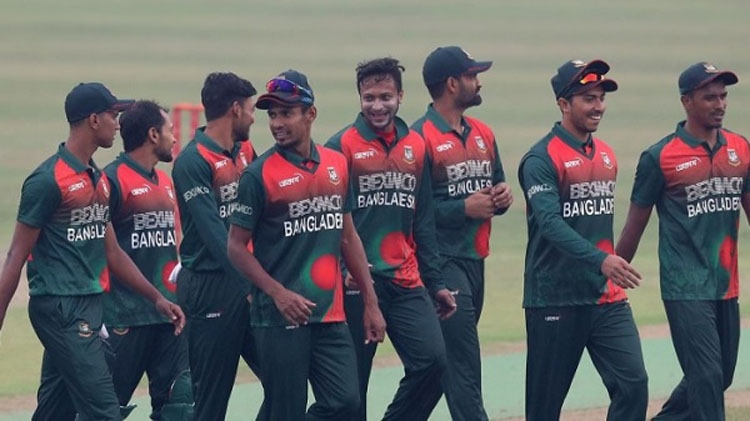 Online desk : The Bangladesh national cricket team today left the country for Zimbabwe for a bilateral series, consisting one Test, three ODIs and as many T20 Internationals.
The Tigers left the country at 4.25 am through a flight of Qatar Airlines. This is Bangladesh’s first tour in this country since 2013 and they aim to make the tour a memorable one.

In the last tour, the Tigers drew the two-match Test and T20 series by 1-1 respectively before losing the three-match ODI series by 2-1.

Despite their recent performance and dominance over Zimbabwe, Bangladesh are not considered absolute favourites in the series given the fact the Southern African nation is totally a different opposition at their own backyard.

Moreover Bangladesh still remains vulnerable at Test and T20 cricket, which is why, it is believed they would face stern challenges in those two formats in Zimbabwe.

The ODI series, which is the part of ICC ODI Super League, is Bangladesh’s favourite format and they have won most of the matches in this format since the 2015 World Cup.

But what would ail the Tigers, specially in the Test format that they didn’t play any longer version match ahead of the tour. They in fact played in the Bangabandhu Dhaka Premier League (DPL), which was held in T20 format and so their preparation is not considered ideal one.

“There is no denying the fact that the preparation is not ideal one for Test cricket but still we are hopeful to win it,” Bangladesh’s Test captain Mominul Haque said.

“If we get our full strength team and play to our potential, we hope we can win the game. In Covid-19 situation, there is little room for every nation to prepare them well for any format of cricket. You have to adjust and change your mindset according to the format.”

This series will be held in a bio-secure environment and to minimize the risk, all of the matches will take place at Harare Sports Club.

Star allrounder Shakib Al Hasan will join the side straight in Zimbabwe from the USA, where he is now holidaying with his family.

Shakib, the player of Mohammedan Sporting Club skipped the Super League phase of the Bangabandhu Dhaka Premier League (DPL) in a bid to keep him mentally refreshed ahead of the Zimbabwe tour.

The newly appointed spin bowling coach Rangana Herath and batting coach Ashwell Prince will join the side in Qatar, where Bangladesh team will have their transit.

Bangladesh will start the series with a two-day practice game, scheduled from July 3-4.