AL wants election with participation of all parties: Hasan 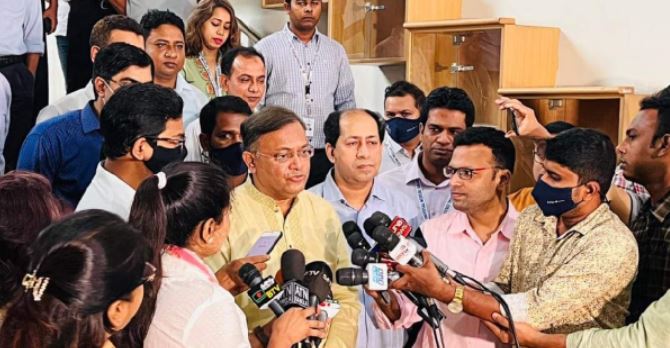 Online Desk : The Awami League wants the next election to take place with participation of all the political parties, said Information and Broadcasting Minister Hasan Mahmud on Sunday.

“BNP was born through the back door yet we expect the party will participate in the next election,” the minister said replying to a journalist’s question after attending a Mother’s Day program at CIRDAP auditorium in the city, UNB reports.

Regarding the BNP’s demand for election under a non-partisan government, Hasan Mahmud said: “There is no possibility for it according to the constitution. The incumbent government performs the duties of election time government if we look at the democratic countries like India, England, Australia, countries of European continent and even USA.”

“Besides, the elections are held under the Election Commission, not the government. Fear of election has actually gripped BNP, that’s why they didn’t participate in any of the local government polls,” he said.

The information minister remarked the Press Freedom Index of Reporters Sans Frontières (Reporters Without Borders, or RSF) is a hateful report when questioned about Bangladesh ranking below Afghanistan this year.

He said, ”By ranking Bangladesh below Afghanistan, where a female reporter was shot dead for presenting news, RSF themselves have proved they prepared the index out of hate.”

Regarding Railway Minister denying he knew his wife’s relatives, the minister said, ”I don’t think he was lying. Even I don’t know all my wife’s relatives. But it is not right to suspend someone following the direction of a minister’s wife,” said Hasan Mahmud.