Kishoreganj haor farmers not getting fair price for paddy 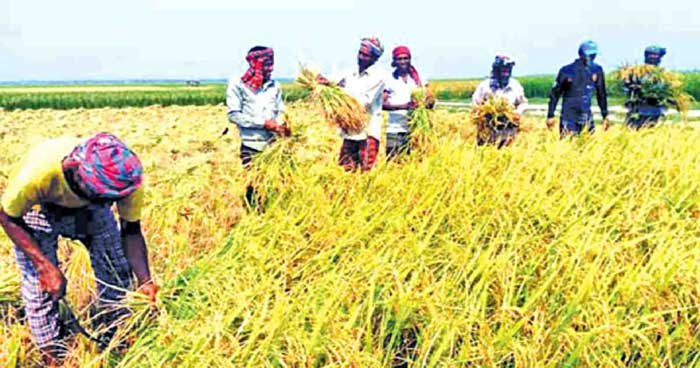 Online Desk : The paddy farmers of haor upazilas Austagram, Itna, Mithamoin, and Nikli of Kishoreganj district are not getting a fair price of paddy in Chamraghat, Bhairab, and Ashuganj wholesale markets in this Boro paddy harvesting season.

As a result, paddy farmers have been counting Tk 150-250 loss per maund of paddy which will push them into financial trouble, reports UNB.

As farmers are harvesting half-ripe paddy, they are unable to utilize it fully. This is a huge loss for them. Moreover, the Boro labour crisis has increased the losses as farmers are counting on extra money to get the necessary number of labourers to harvest Boro crops.

This time, the unfair price of paddy has turned the haor farmers unhappy. They are now lamenting and passing days thinking about how they will repay their loans from local lenders.

Farmers said they have been counting huge losses as they are not getting a fair price this year. Mill owners are buying maximum paddy at a low price produced in the haor areas.

The production cost per maund of coarse paddy, including the labour cost, is near Tk 900 while its selling price is only Tk 650 to Tk 750, while plain paddy is being sold at Tk 750 to Tk 850 against the production cost near Tk 1000.

Karim Mia, a farmer of Dhanpur of Itna upazila, said he has expended more than Tk 1,000 to grow one maund paddy. But he is not getting a fair price in the local market which has forced him to sell paddies at lower prices counting huge losses.

Farmer Amin Mia, who has come to sell paddy in Bhairab Bazar wholesale market from Austagram upazila, said most of the farmers in Austagram cultivated Boro croplands by taking lease from the land owners. Many of them have also borrowed money from local creditors. As farmers are not getting a fair price for paddy this year, it will be a tough task for them to maintain their livelihood after paying debts.

He also urged the government to procure paddy at a fair price directly from the farmers.

Ujjal Saha, agriculture officer of Itna upazila said, “Most of the farmers of the haor areas are ultra-poor. They are bound to sell paddy in early Baishakh to pay the borrowed money. Money-lenders put huge pressure on them in Baishakh. If they sell paddies a few days later, they will get a good price.”