Siddons backs Mushfiqur, Mominul to hit back with bang 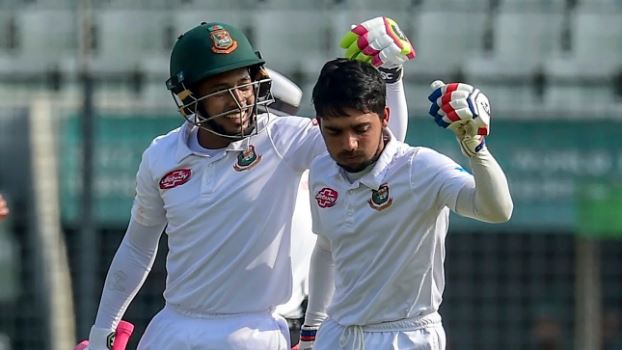 Online desk : Despite a lean batting form, Bangladesh batting coach Jamie Siddons kept faith on Mushfiqur Rahim and Test captain Mominul Haque as he believed that the duo would get back to amongst runs during the first Test against Sri Lanka, starting on May 15 at Zahur Ahmed Chowdhury Stadium in Chattogram.

Bangladesh’s batting’s mainstay Mushfiqur averaged only 26 this year in longer version form and also went through a bad patch in white ball cricket, much to the disappointment of the cricket fans.

Mominul meanwhile got out in single digit figure for nine times in the last 12 innings. His score was just 0, 2, 6 and 5 in the last four innings against South Africa.

While those two vital cogs of were going through a massive bad patch, it affected Bangladesh’s batting badly. But Siddons saw runs coming from the duo very soon.

“Every batsman goes through patches where they don’t make runs. I am really confident that Mushfiqur will make runs out here this week,” Siddons said at Zahur Ahmed Chowdhury Stadium after Bangladesh’s practice session on Tuesday, BSS reports.

“I have seen some really good signs, the way he is hitting it in the last two days. We worked on a couple of little things with him. I think he is going to have a successful series.”

Mushfiqur’s problem was only compounded when Bangladesh Cricket Board (BCB) president Nazmul Hassan Papon sought clarity from senior players on their future plans, saying that due to the advent of T20 cricket, the senior cricketers are no longer focusing on all formats.

Many believed this statement was directed to Mushfiqur Rahim who is the only senior cricketer who is playing all format of cricket without any complain.

Without mentioning anyone’s name, Papon said, “Our problem is that we don’t want anyone to feel bad and we want them to quit with a smiling face.”

When asked Siddons said, Mushfiqur is not focusing on what was happening outside rather he only concentrated on the upcoming two Test matches against Sri Lanka.

“I think Mushy is only focused in the next two Tests. I don’t think he is worried about his career in any format,” Siddons remarked.

“I think he is worried about making runs for us in these two Tests. He is focused on Tests at the moment. He is quite successful in white-ball cricket. Good players can have moments when they don’t make runs, and then bounce back. That’s why they are great players. Mushy is a very successful Test player. He keeps making runs. He might have a period like South Africa, and then he will bounce back again.”

Siddons also believed that the media should not put more pressure on Mushfiqur as he is not in form right at the moment.

“So you guys need to stop talking negative. Don’t put pressure on them just because they missed out on one series. Build them up all the time. Then they won’t have that pressure,” he said.

While he believed that Mushfiqur will have a successful series, he saw century coming from Mominul’s willow also as the captain had a record to envy in Chattogram venue.

“He (Mominul) has nine centuries in Chattogram. This week is another chance to make another couple. He loves this ground. We are just trying to get him ready to go. He is very confident,” Siddons said.