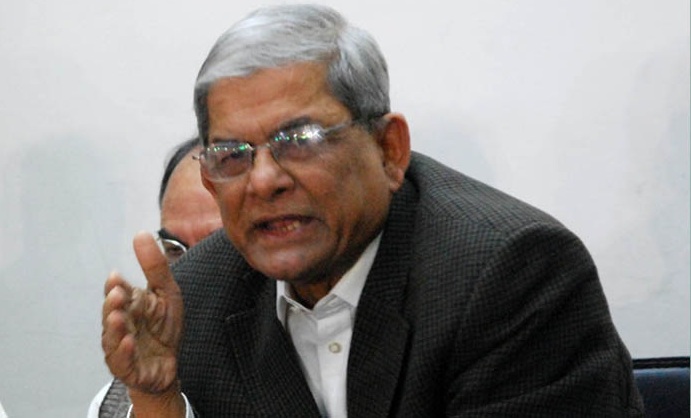 “This government won’t take a lesson from the persisting situation in Sri Lanka as they don’t know how to take a lesson. They didn’t take any lessons over the last 10 years,” he said, reports UNB.

Speaking at a press conference at BNP’s Nayapaltan central office, Fakhrul also said, “Their (current govt’s) condition will be worse than Sri Lanka. “People (Ruling party men) in Sri Lanka have jumped into the river, but they (AL leaders) will jump into the Bay of Bengal.”

Fakhrul said their party’s standing committee meeting that was held on Monday night turned down Prime Minister Sheikh Hasina’s recent comments on bringing BNP to the next national election and using the Electronic Voting Machines (EVMs) in it.

Renewing their party’s stance, he said BNP will not join the polls under the current ‘illegal’ government under Prime Minister Sheikh Hasina.

He said their standing committee also viewed that EVMs will not be acceptable for voting in the national election.

Fakhrul questioned how the Prime Minister determined that the EVMs will be used in 300 seats. “It’s the responsibility of the Election Commission to decide whether it will use the EVMs or not. It has exposed that the government controls the electoral process.”

He said their standing committee meeting blamed the government for the abnormal rise in edible oil prices and the creation of an artificial crisis of soybean oil in the market.

“The meeting thought that the decision (to hike the prices of soybean oil) was taken to benefit the members of the syndicate of unscrupulous businessmen directly supported by the government,” the BNP leader said.

Fakhrul said people are going through a miserable life as the prices of all essential items went up due to the government’s corruption and wrong policies.

He said the BNP’s standing committee demanded the immediate resignation of the government for its failure to control commodity prices.

Fakhrul said their standing committee meeting expressed surprise over the foreign trip of convicted Awami League MP Haji Mohammad Selim. “This incident has proved that all the state institutions have been politicised.”

He urged the government to create a democratic situation in the country by unconditionally releasing Khaleda Zia.