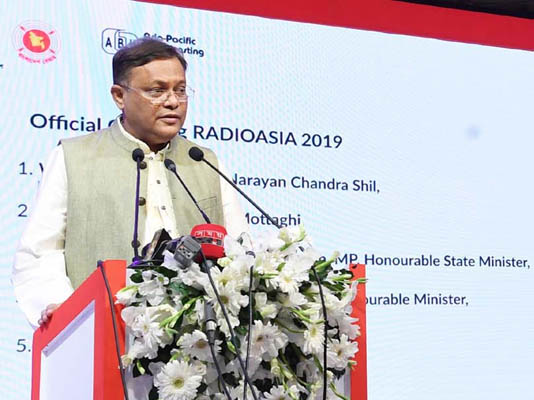 “…I strongly believe that radio can play an important role in protecting our human values, social values and family values,” he said while addressing the inaugural session of a three-day ABU Radio Asia Conference and Radio Song Festival at Hotel Intercontinental in Dhaka.

The Asia Pacific Broadcasting Union (ABU) in association with Bangladesh Betar and Bangladesh Television is organising the event.

Speaking as the chief guest, Dr Hasan said the present government is working to build a poverty- and corruption-free digital Bangladesh while Bangladesh Betar is playing a vital role in this regard.

Recalling the glorious role of radio in the country’s 1971 Liberation War, he said Swadhin Bangla Betar Kendra, the radio broadcasting centre of Bengali nationalist forces during the Liberation War, had played an important role in liberation struggles, broadcasting the declaration of independence proclaimed by Father of the Nation Bangabandhu Sheikh Mujibur Rahman, and encouraging the people of the soil to take part in the war.

Highlighting the country’s development and progress, he said Father of the Nation Bangabandhu Sheikh Mujibur Rahman had a dream to build Bangladesh as a prosperous nation.

The founder of the nation could not fulfill his dream as he along with most of his family members was assassinated on August 15, 1975, Hasan added.

But, he said, Bangladesh is moving fast, through development process, towards fulfilling the dream of Bangabandhu under the leadership of her daughter and Prime Minister Sheikh Hasina.

Hasan, also Awami League publicity and publication secretary, said although Bangladesh having over 167 million people is one of the densely populated countries in the world; it is now a food surplus country.

Before 2009, per capita income of people was about US$ 600, while its stands now at over US$ 2,000, he said, adding today Bangladesh has surpassed Pakistan in all indexes and even surpassed India in many social indicators.

The information minister said today the Digital Bangladesh is not a dream at all but a reality.

A total of 63 representatives from different countries are taking part in the radio meet, which is being held in Dhaka for the first time.