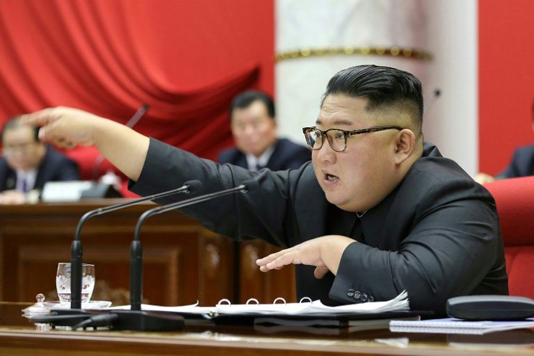 North Korean leader Kim Jong Un appeared to skip his set-piece New Year speech Wednesday, with analysts suggesting the move may have been to avoid implicitly admitting mistakes in the last two years of diplomacy with the US.

Kim has been giving the annual speech since 2013, after he revived the tradition started by his grandfather — North Korea’s founding leader Kim Il Sung. It has been a key moment in the North Korean political calendar, reviewing
the past and setting out goals for the future, and printed in full in the Rodong Sinmun mouthpiece newspaper.

At first he wore a party uniform and stood at a lectern to address troops, but the format has evolved over time as Pyongyang modernises its messaging, and last year he sat in his office in a Western-style suit and tie. But this year there was no January 1 morning broadcast — as has been standard recently — or even at noon, considered the latest likely time.


Instead state television showed a lengthy readout of Kim’s address at a four-day party meeting, over footage of the leader addressing top officials – – where he said Pyongyang no longer considered itself bound by its moratoriums on nuclear and intercontinental ballistic missile tests, and threatened to demonstrate a “new strategic weapon”.

It is a marked departure from the diplomacy of the last two years, which have not seen the North gain sanctions relief or take sufficient steps towards denuclearisation to satisfy the US. Park Won-gon, a professor of international studies at Handong University in South Korea, said the change of format may have been to avoid “burdening” Kim.


“There is a huge difference between giving a New Year’s speech with your own voice and announcing what has been decided at the plenary meeting,” he said. “When you give a speech, this means you are giving a direct message to North Korean citizens on top of the outside world.

“This may require you to inevitably admit that your past approach has been flawed.” The move may also have been intended to soften the message, added Leif- Eric Easley, a professor at Ewha Womans University in Seoul. “By giving domestic facing remarks at a party meeting, Kim could strike an assertive tone without looking as belligerent had he made nuclear threats in a standalone address.”
https://english.dainiksomoysangbad24.com/modi-phones-sheikh-hasina-extends-new-year-greetings/
(AFP)