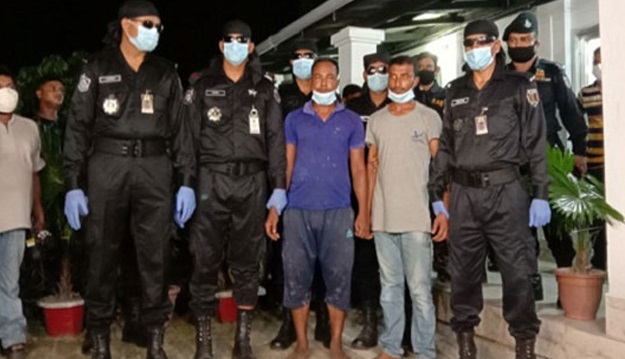 Reza Ahmed Ferdous said the detained Asadul Islam claimed that another accused Nabirul Islam was also involved in the attack.

“Asadul said that they entered the UNO Waheeda Khanam’s residence and attacked her for burglary in her house,” he said.

Quoting the confession of Asadul, the RAB-13 Commander said they launched the attack on UNO Waheeda Khanam and her father Omar Ali for committing burglary in the residence.

“But, we don’t believe it right now. We need further investigation to know the details exactly why the attack was committed,” he said.

House painter Nabirul Islam, 38, was arrested at about 2:00pm on Friday in connection with the incident. A hammer was also seized from his possession. He was arrested from village Chak Bamondia Biswanathpur near Ghoraghat upazila.

Miscreants entered the bedroom of UNO Waheeda Khanam cutting the ventilator of her official residence at Osmanpur under Ghoraghat upazila after Wednesday midnight. Before that the miscreants tied the night guard up and kept him inside a room.

UNO’s father Omar Ali, 60, leaves the house everyday for morning walk. As he didn’t came out of the house on Thursday morning, his companions went to the house to enquire abut him. Receiving no response from inside the house, they later informed the police.

Receiving information, Ghoraghat police rushed to the residence and rescued the UNO, her father and night guard. The injured father and daughter were first admitted to the Rangpur Medical College Hospital. Later, Waheeda was airlifted to Dhaka. She was then admitted to the National Neuroscience Institute and Hospital at Agargaon. Her father is undergoing treatment at Rangpur Medical College Hospital.

Meanwhile, critically injured Waheeda has regained her senses. Her condition is now stable, but she is not out of danger, said doctors.

Since the surgical operation of injured UNO Waheeda’s head at National Neuroscience Institute and Hospital in Dhaka on Thursday night, Waheeda has been on 72-hour observation of physicians.

However, she talked to her husband after regaining senses.

Physicians said her blood pressure and heart beats were normal.