Over 600 billboards, signboards in the capital evicted 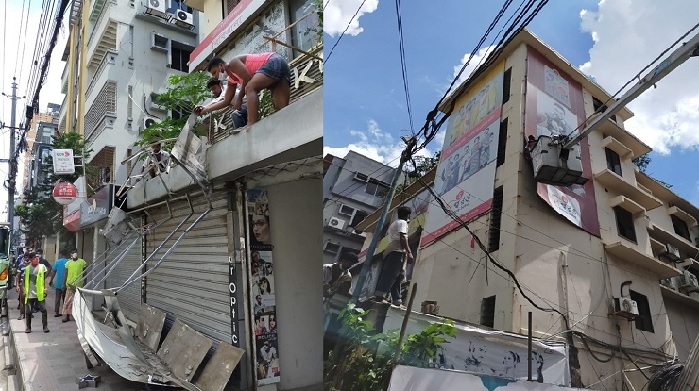 During the eviction drive, the courts fined five business establishments about Tk 97,000 on various charges including doing business occupying the footpaths and without trade licences.

Besides, the evicted billboards were sold at Tk 1,79,500 through open auction.

The mobile courts also found that trading licences were taken from the Dhaka South City Corporation (DSCC), but the shops were opened in the areas under the DNCC. No permission was even taken for hanging the signboards of the business establishments.

Such irregularities were detected during the drive of the mobile court in the DNCC on Thursday. Eviction drives against illegal billboards were carried out in the city’s Gulshan, Banani and Badda Pragati Sarani simultaneously. During the drives, illegal billboards of all the so-called prominent business establishments and shops were evicted. The mobile court also demolished a traffic police box occupying the footpath.

Besides, another mobile court led by executive magistrate Sajia Afrin at Shahjadpur on Pragati Sarani evicted 163 signboards and billboards.

Magistrate Abdul Hamid Mia said taxes for displaying advertisements would be realised. Whoever tries to display their advertisements must pay taxes. Otherwise, their billboards will be demolished.

Visiting the evicted areas, DNCC Mayor Atiqul Islam called upon the businessmen to abide by the government rules.