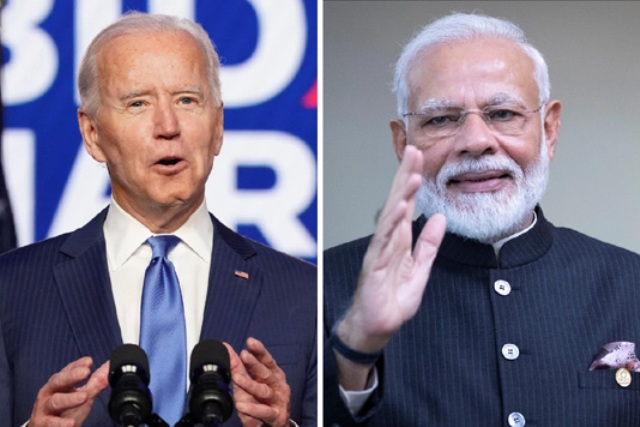 Online desk : President Joe Biden signaled he would seek to deepen the close US relationship with India in his first talks on Monday with Prime Minister Narendra Modi as he added climate change and “democratic” values to the agenda.
Biden’s telephone call marked a continuation of the upbeat tone of his predecessor Donald Trump, who paid a state visit to India a year ago on his last foreign trip as his administration saw a partner in its tough stance on China.

But Biden also raised climate change, which the new US leader has elevated to a top priority amid the planet’s rapidly warming temperatures, reports AFP.

Biden and Modi committed to “work closely together to win the fight against the Covid-19 pandemic, renew their partnership on climate change, rebuild the global economy in a way that benefits the people of both countries and stand together against the scourge of global terrorism,” the White House said in a statement.

In New Delhi, the prime minister’s office said Modi welcomed Biden’s raising of climate ambitions and rejoining of the Paris accord, from which Trump withdrew.

It said that Modi looked forward to participating in a climate summit that Biden plans to call in April.

India is the third largest emitter of carbon dioxide responsible for climate change after China and the United States, and historically has argued that it is unfair for it to be held to the same rules as developed nations.

The White House said Biden had “underscored his desire to defend democratic institutions and norms around the world and noted that a shared commitment to democratic values is the bedrock for the US-India relationship.”

The White House said Biden also spoke to Modi about how the “rule of law and the democratic process must be upheld in Burma,” where the military retook power a week ago.