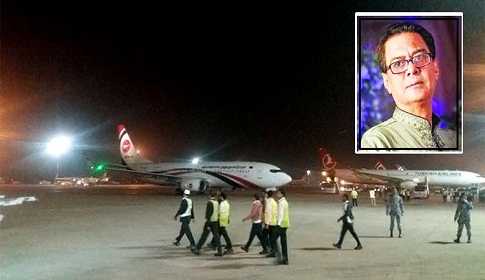 Amid grief and gloom and with people of all walks of life waiting to pay tribute to eminent Awami League (AL) leader Syed Ashraful Islam, his body arrived here from Bangkok this evening.

Family sources said the body of Syed Ashraf, Public Administration Minister and AL Presidium member and former general secretary, was flown to the Hazrat Shahjalal International Airport at 5.55 pm by a Biman flight. He died of lung cancer at a Bangkok hospital on January 3.

A delegation of Awami League led by its General Secretary Obaidul Quader received the body at the airport. Senior party leaders including Tofail Ahmed, Begum Matia Chowdhury, Mohammed Nasim and Dr Abdur Razzak paid tribute to him and offered a munajat for peace of the departed soul.

The body of the veteran AL leader was then taken to his official residence on Bailey road. The body will be later kept at the mortuary of Combined Military Hospital (CMH).

On Sunday, his first namaj-e-janaza will be held on the Jatiya Sangsad Bhaban’s south plaza at 10.30pm. A guard of honour will be given to him there.

On that day, his body will be taken to Kishoreganj, from where he was elected member of parliament (MP) five times. His second namaj-e-janaza will be held at historic Sholakia Eidgah Maidan in the district town at 12 noon.

His third namaj-e-janaza will be held at Mymensingh Anjuman Eidgah ground at 2pm.

Syed Ashraf, a popular figure in the arena of politics, will be laid to eternal rest at Banani graveyard in Dhaka at 4.30pm on Sunday.

He died at the Bangkok hospital aged 68 after undergoing treatment for lung cancer for a long time. He is survived by a daughter. His wife died in 2017.

Syed Ashraf was born in Mymensingh in 1952. His father Syed Nazrul Islam was acting President of Mujibnagar Government in 1971 and one of the key figures of Bangladesh independence struggle.