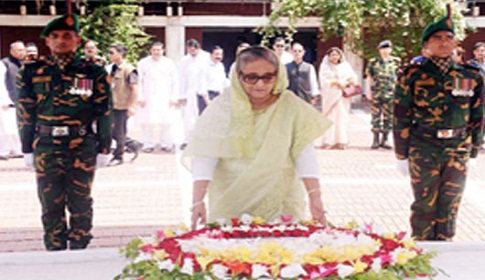 Prime Minister Sheikh Hasina today paid homage to Father of the Nation Bangabandhu Sheikh Mujibur Rahman here on the occasion of installation of her government for the third consecutive term.

The prime minister paid tributes to Bangabandhu by placing a wreath at his shrine here this afternoon.

After laying the wreath, Sheikh Hasina stood in solemn silence for some time as a mark of profound respect to the memory of Bangabandhu, the architect of independence.

A smartly turned out contingent drawn from the three forces gave an honour guard to the prime minister, while the bugle played the last post on the occasion.

The prime minister offered fateha and joined a special munajat seeking eternal peace of Bangabandhu and other martyrs of the August 15 carnage.

She also joined a milad and doa mahfil held on the Bangabandhu’s Mausoleum premises.

Awami League President Sheikh Hasina took oath as the prime minister for the fourth time, the third in a row, heading a 47-member council of ministers on Monday, a week after the Awami League-led Grand Alliance’s landslide victory in the 11th parliamentary election held on December 30.

President M Abdul Hamid administered the oath of office and oath of secrecy to Sheikh Hasina and members of her council of ministers.