London-Dhaka to work together for stronger trade, security cooperation 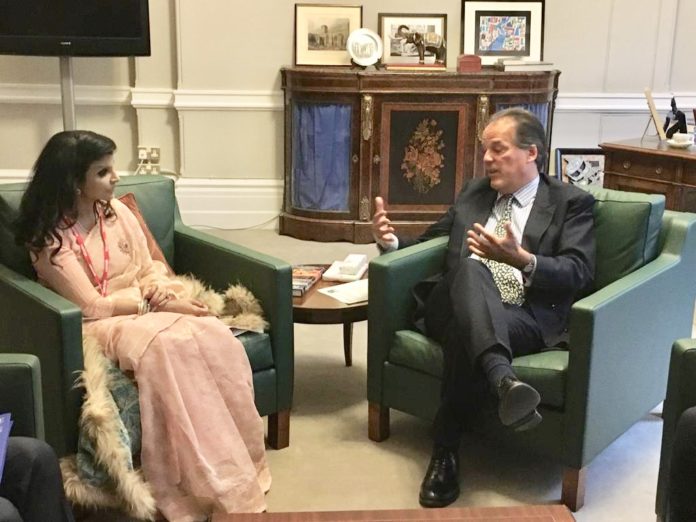 The United Kingdom has pledged to work together with Bangladesh for bolstering trade, economic and security
cooperation.

“We attach high importance to Bangladesh and a major focus of our relations with the South Asian country in the coming days will be to strengthen trade, economic and security cooperation,” said Minister of State for Asia and the Pacific at UK Foreign and Commonwealth Office Mark Field on Thursday.

He made the comments while receiving the newly-appointed Bangladesh High
Commissioner to the UK Saida Muna Tasneem at his office in London, according
to a message received here today.

Recalling his earlier visits to Bangladesh, Minister Field reaffirmed his
personal commitment to further deepening London-Dhaka ties, especially given
his longstanding engagements with the UK All Party Parliamentary Group on
Bangladesh and the British-Bangladeshi diaspora in the UK.

At the meeting, Bangladesh’s new High Commissioner Tasneem renewed the
commitment of the government of Prime Minister Sheikh Hasina in its new term
to taking Dhaka-London relations to a new level of strategic and economic
partnership.

She expressed her resolve to unfold new areas of mutually beneficial
cooperation in Bangladesh-UK relations.

Tasneem also briefed Minister Field that a major focus of her tenure in
the UK would be to boost and diversify Bangladesh’s bilateral trade with the
UK, attract greater British investments in mega infrastructure projects,
energy, IT and service sector in Bangladesh, and enhance strategic level
cooperation including in defence, security and regional connectivity.

The envoy put forward a number of proposals towards creating a strong and
vibrant culture and sports connectivity between the two Commonwealth nations
specially through cricket, football, curry industry and the talented new
generations of the British-Bangladeshi community in the UK.

Minister Field lauded the extraordinary educational achievements of
successive generations of British-Bangladeshi diaspora in the UK, including
those from his own constituency.

Reiterating the UK’s deep appreciation for Prime Minister Sheikh Hasina’s
humanitarian support and refuge to nearly 1.1 million Rohingya people, the UK
minister underscored the need for ‘their voluntary, dignified, viable and
sustainable return’ to Myanmar through involvement of UN agencies.

Tasneem reassured the UK that Prime Minister Sheikh Hasina in her new term
would continue to uphold the ‘principles of non- refoulement’ and
‘humanitarianism’ and ensure a voluntary, safe and sustainable return of
forcibly displaced Myanmar nationals that fled to Bangladesh to escape
persecutions in Myanmar.

The minister reiterated that the UK would continue to play its leadership
role in the UN Security Council and bilaterally with Bangladesh in ensuring
prevention of human rights violations and alleged ‘genocide’ of Rohingyas in
Myanmar.

He also appreciated Bangladesh for its leadership role in the UN
Peacekeeping and recognised the sacrifice made by Bangladeshi peacekeepers
for global peace.

The High Commissioner discussed with Minister Field a proposal for
celebrating 50 years of Bangladesh-UK relations in 2021 which was hallmarked
by the warm welcoming of Father of the Nation of Bangladesh Bangabandhu
Sheikh Mujibur Rahman by the-then British Prime Minister Sir Edward Heath
during Bangabandhu’s historic homecoming to Dhaka via London in January,
1972.