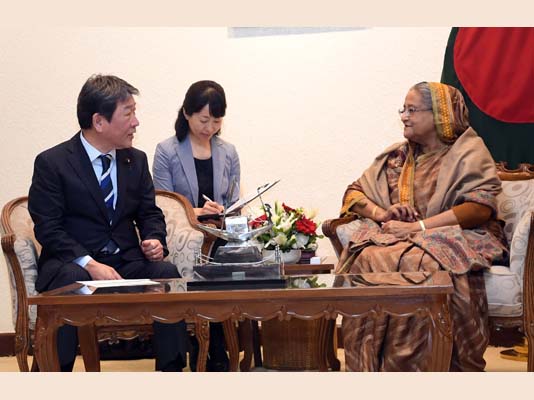 “Japan particularly is keen to invest in IT sector,” he said during a
courtesy call on Prime Minister Sheikh Hasina at her office here.

Japan is a great development partner of Bangladesh since independence which
was achieved by Father of the Nation Bangabandhu Sheikh Mujibur Rahman, the
premier said.

Japanese minister congratulated Sheikh Hasina for assuming the office as
prime minister for third consecutive term through a participatory election.

Toshimitsu Motegi expressed his firm conviction that relations between
Bangladesh and Japan would be more strengthened during current tenure of
Prime Minister Sheikh Hasina.

Welcoming the Japanese minister in Bangladesh, Sheikh Hasina said Japan is
an old friend of Bangladesh, giving support to various mega projects. Japan
is a development model for Bangladesh, she also said.

The premier recalled Japan’s contribution to Bangladesh’s economic
development and highlighted her government’s plan to develop every village
with urban facilities.

The prime minister proposed Japan to provide support to the training
programs in the IT sectors and deep sea fishing.

Against the backdrop of PM’s call for hiring trained home care nurses from
Bangladesh, the Japanese minister responded positively, the press secretary
said.