PM for unity among Muslim Ummah 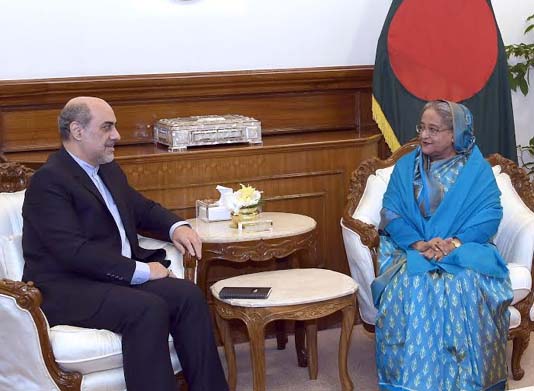 The prime minister expressed this view when newly-appointed Iranian
Ambassador to Bangladesh Mohammad Reza Nafar paid a courtesy call on her at
her office here this morning.

Mentioning common cultural bonds between the two countries, the prime
minister said Bangladesh has adopted the foreign policy – ‘friendship to all
and malice to none’.

Highlighting Bangladesh’s tremendous socioeconomic development, the prime
minister said her government is working hard to improve the living condition
of the people. “We have reduced poverty rate to 21 percent and our
development policy is rural based,” she said.

The prime minister noted the existing religious harmony in the country and
said that the people of all faiths participate to any festival together.

She welcomed the Iranian envoy in Bangladesh and conveyed her regards to the
Iranian president.

Sheikh Hasina also assured the new Iranian envoy of extending all kinds of
cooperation from her government during his tenure in Bangladesh.

The Iranian ambassador congratulated Prime Minister Sheikh Hasina on behalf
of their president on her party’s landslide victory in the December 30
general elections.

Reza Nafar described the prime minister as the wise and prudent premier of
Bangladesh. “We all the people of Iran are fond of you,” he said.

He congratulated Prime Minister Sheikh Hasina on Bangladesh’s graduation to a
developing country from a least developed one.

Mentioning existing traditional religious and cultural bonds between Iran and
Bangladesh, Reza Nafar said: “We will have to carry forward this
relationship.”

The ambassador said the the cooperation between the two countries at the
regional and international levels is good. “Political and cultural relations
remain at good level,” he said.

He, however, emphasised boosting volume of trade between the countries,
saying that at the moment it (trade) is not satisfactory.

The ambassador said despite Western sanction, Iran is moving forward.

“We’re working on reducing tension in the region as we are not a war-monger
country,” he said.

In this connection, Reza Nafar said Iran will welcome any initiative of Prime
Minister Sheikh Hasina to reduce tension in the region.