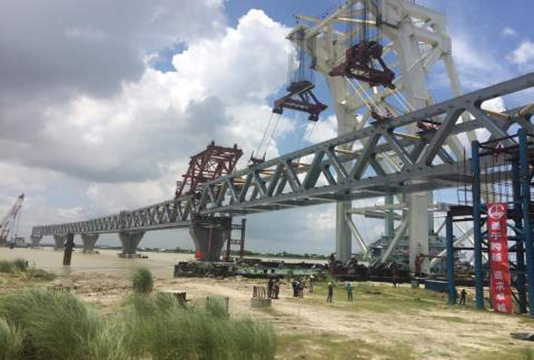 The construction of the 6.15-kilometre Padma Bridge is progressing fast as its five more spans will be installed soon.

“Six spans have already been set up while five more will be installed soon. One will be set up in the current month and another next month,” Project Director of Padma Multipurpose Bridge M Shafiqul Islam told BSS today.

According to the Padma Bridge project details, when completed it will be the largest bridge in Bangladesh and the first fixed river crossing for road traffic. It will connect Louhajong, Munshiganj to Shariatpur and Madaripur, linking the south-west of the country, to northern and eastern regions.

According to her address on that day, 19 southern districts will be directly connected with Dhaka on road and rail routes with the completion of the Padma bridge and their living standard will improve with expansion of trade and commerce.

“National economy will witness 1.2 percent GDP growth rate, while 0.84 percent poverty will be reduced every year after completion of the bridge to be built at an estimated cost of Taka 30,193.39 crore,” she said.

Sheikh Hasina said the implementation work of the bridge is going on satisfactorily.

“Not only people of the region but also people of the entire country will benefit from the bridge… The GDP will be increased by 1.50 percent to 2 percent after completion of the Padma Bridge.

Construction work on the country’s longest bridge started in December in 2015. The bridge will have 41 spans, each of 150m.

According to the engineers concerned, a total of 41 spans will be installed on 42 concrete pillars.