Govt. to work for all irrespective of one’s political faiths: PM 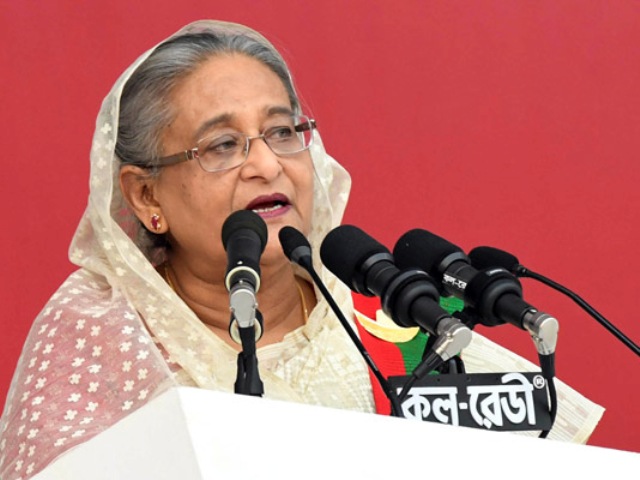 Prime Minister Sheikh Hasina today promised to value the people’s confidence bestowed on her government through the December 30 elections saying, it would work for every citizen irrespective of their political affiliations or views.

“Victory and defeat is a natural course of an election and its true Awami
League won the election but, I want to make it very clear — my government
would work for every people irrespective of their political faith,” she told
a mammoth rally in the capital.

The premier added: “Every party and every citizen is important for us.”

She said her government would work as well for “balanced development” of every
area of the country in public interest.

Awami League staged the public meeting at Suhrawardy Udyan to celebrate its
landslide election victory while Sheikh Hasina joined the celebration as the
party president.

She said with their mandate the people “gave us the duties to work for
them and “our government” would work for socioeconomic development of every
people, ensuring their political rights, improving their living condition.

“It’s a great opportunity for us to serve them,” Sheikh Hasina said.

Sheikh Hasina said the people spontaneously voted for Awami League in view
of its election manifesto and “we would always keep it in mind during our
term in office”.

She asked the people who were elected to parliament must fulfill the
people’s aspirations as they gave their mandate against “terrorism,
militancy, drug and corruption”.

Sheikh Hasina reminded the party men that earning victory was easier than
its protection while it was tough as well to serve the people after winning
the polls.

“(But) I will try to give value to the peoples’ confidence even at the cost
of my life,” she said and urged everybody to work heart and soul to translate
their commitment to the people.

The prime minister said people wanted peace and the country’s continued
journey towards prosperity for which they lent their support to Awami League
as “our party is committed to achieve the cherished goal”.

Sheikh Hasina said her government wanted to build a modern digital society
with people having adequate knowledge on science and technology and their
support for the government in the elections reflected their will to expedite
the process of building a digital Bangladesh.

The premier said the result of the December 30 result was actually the
people’s mandate in favour of the Liberation War spirit which meant there was
no room for war criminals, anti-liberation forces and those who indulge in
militancy, drug and corruption.

The premier said the plotters of the August 15, 1975 carnage wanted to eliminate “Bangabandhu’s blood seed to deprive the people of leadership” but recalled that she and her sister survived the bloodbath as they were living abroad at that time.

Sheikh Hasina said she had devoted her life to welfare of the people of Bangladesh and vowed to materialize the dream of Bangabandhu to build a hunger and poverty free Bangladesh where no one would suffer for want of food, shelter and healthcare service.

The prime minister said people of Bangladesh gave vote to her party time and again. “It’s a great honour for me as people have given me the opportunity for the fourth time to work for them,” she said, adding that her government would fulfill all commitments word by word.

In the current tenure, Sheikh Hasina said her government would take forward Bangladesh and make it a ‘developing country’. To achieve the goal, corruption, drug and terrorism must be stamped out, securing the public life, she said.

As a political worker, the prime minister said, she always upheld the spirit of doing something for the people instead of getting anything from politics. Sheikh Hasina said she always upholds the spirit of the War of Liberation in running the country and she will do the same in future.

She thanked the countrymen for voting AL to power again and sought their support in building a prosperous Bangladesh so that every Banglaee can live in the world community keeping his/her head high.

Pointing out her government’s plan to reach the urban facilities to every village, the prime minister said rural people would get a better life and all would have access to education and employment.

Sheikh Hasina said Bangladesh will celebrate the birth centenary of Father of the Nation Bangabandhu Sheikh Mujibur Rahman in 2020 and Golden Jubilee of Independence in 2021 as a nation free from hunger and poverty. By 2041, Bangladesh would be a prosperous nation and in 2071 our next generation would be the citizens of a prosperous nation, she said.