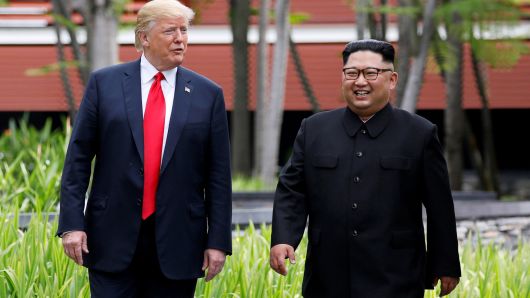 The planned second summit between US President Donald Trump and North Korean leader Kim Jong Un needs to make tangible progress on Pyongyang’s nuclear weapons if it is to avoid being dismissed as “reality TV”, analysts say.

Their summit in Singapore in June was undoubtedly historic, the first ever
encounter between the leaders of two nations whose forces — backed by arrays
of allies from each side of the Cold War — fought each other to a standstill
decades ago.

The world’s media were transfixed as the pair shook hands on the verandah
of a historic hotel and strolled together in its grounds, before Trump held
an hour-long press conference extraordinary even by his own unique standards.

But the agreement they signed was long on rhetoric and short on details,
with Kim pledging to work towards the “denuclearisation of the Korean
peninsula”. Progress has since stalled as Pyongyang and Washington disagree
over what that means and how to achieve it, with each accusing the other of
dragging their feet and acting in bad faith.

Critics say North Korea has made no concrete commitments and is unlikely to
surrender its atomic arsenal, while Washington’s policy of maintaining
pressure through isolation and sanctions has left Pyongyang seething.

Even so the White House said Friday Trump would meet the North Korean
leader again “near the end of February” at a location yet to be announced.

“Now the hard work begins,” said Harry Kazianis of the Center for the
National Interest in Washington.

“Both nations must now show at least some tangible benefits from their
diplomatic efforts during a second summit, or risk their efforts being panned
as nothing more than reality TV.”

The North has carried out six nuclear tests and launched missiles capable
of reaching the entire US mainland, but the exact size of its atomic armoury
remains unconfirmed.

“All efforts should be poured into having the North come to the table with
a complete list of its nuclear arsenal,” Kim Sung-han, professor of
international relations at Korea University, told AFP.

The declaration would be a tangible step in itself, he said, adding Trump
should not lift sanctions or agree to formally end the 1950-53 Korean War —
when hostilities stopped in a ceasefire rather than a peace treaty — for
“anything other than the list”.

When South Korean President Moon Jae-in, who has sought to engage the North
as he brokered the talks process, went to Pyongyang in September for his
third summit with Kim, his host offered to shutter a missile-testing site and
the Yongbyon nuclear complex if the US takes unspecified “corresponding
measures”.

Washington has repeatedly said it expects the North to give up its nuclear
arsenal, doggedly developed over decades by the Kim dynasty, at a vast cost
in resources and isolation, and multiple sets of international sanctions.

But the North sees denuclearisation more broadly, seeking an end to the
sanctions and what it sees as US threats against it — sometimes referencing
Washington’s military deployments in the wider region, such as Japan and
Guam.

An absence of a clearly-worded agreement will raise scepticism over
Pyongyang’s sincerity, pointed out Lim Eul-chul, professor of North Korean
studies at Kyungnam University.

“If the wording of a second summit agreement is similar to the June 12
statement, it will make it very difficult for Trump to defend his North Korea
policy,” he said.

Pyongyang might agree to shut down the Yongbyon complex and a missile test
centre in the presence of international inspectors, Lim said, but “only if
Washington eases sanctions and agrees to the end-of-war declaration”.

And some analysts have raised concerns about recent Trump administration
comments about removing the threat to the US, suggesting that could imply the
North giving up its intercontinental ballistic missiles while retaining its
bombs and the ability to threaten its near neighbours.

The issues are complex and the details will be key. But unlike other such
diplomatic processes, there have not been repeated rounds of lower-level
talks to prepare for the second Kim-Trump summit.

Stephen Biegun, the US special representative on North Korea, is to attend
a conference in Sweden starting Saturday that will involve Pyongyang
officials.

He is expected to sit down with Choe Son Hui, a top North Korean diplomat
intimately involved in the US-North Korean relationship.

For the next summit to go well, Biegun and Choe “need to spend scores of
hours talking in the next weeks”, tweeted Ankit Panda of the Federation of
American Scientists.