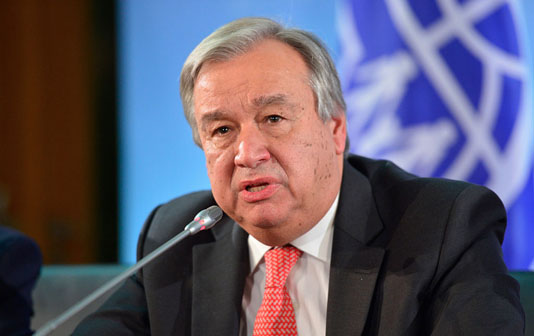 United Nations Secretary General Antonio Guterres has showed his enormous frustration over Myanmar for its “too slow” role in safe repatriation of Rohingyas from Bangladesh.

“I feel an enormous frustration with the lack of progress in relation to Myanmar and with the suffering of the people,” he said at a press conference in New York on Friday, according to the UN official website.

“Unfortunately, the truth is that the situation on the ground has not been conducive to it; things have been too slow,” he said adding “and one of the dramatic aspects when you fail in solving the root causes of a problem is that violence then tends to erupt again, and that’s what we have seen recently in Myanmar.”

He said the UN insists in the need to create conditions for Rohingyas to be willing to go back.

The UN Chief said one of the first steps, could be done is to solve the problem of internally displaced. “Finding adequate solutions for the internally displaced would be a very good way to give credibility to the perspective of a future return,” he said.

Terming Bangladesh as a very important partner for the UN in relation to the Rohingya refugees, Guterres said, “We’re extremely grateful to Bangladesh for its generosity in hosting so many Rohingya refugees in the extremely difficult circumstances that exist and taking into account the problems and the difficulties of the Bangladeshi development in itself.”