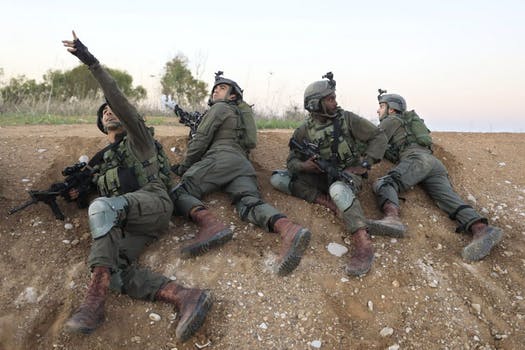 A Hamas militant was killed by Israeli tank fire along the Gaza border Tuesday, the health ministry in the strip said, in what the Israeli army described as a response to gunfire which wounded a soldier.

Ministry spokesman Ashraf al-Qudra told AFP that Mohammed al-Nabaheen, 24,
was hit by tank fire and died, while two other people were hurt.

Hamas, the Islamist movement that rules Gaza, confirmed he was a member of
its armed wing, the Ezzedine al-Qassam Brigades.

The Israeli army said it had targeted a Hamas observation post after a
soldier was lightly wounded when a bullet struck his helmet.

In a statement, it said an initial investigation found “an assailant fired
at troops” during a riot that included rock-hurling.

“A bullet struck the helmet of an IDF officer, lightly injuring him,” it
added, referring to the Israel Defence Forces.

A picture published by the army on social media showed the soldier’s
damaged helmet.

It was the first time in weeks that an Israeli soldier had been reported
injured by gunfire along the border, though earlier Tuesday the army said
shots were also fired at troops in a separate incident.

In response a tank targeted a Hamas military post without reports of any
injuries.

Israel holds Hamas responsible for all fire from the Gaza Strip, even if it
carried out by smaller groups.

At least 244 Palestinians have been killed in Gaza by Israeli fire since
regular protests began along the border in March.

Most were killed during the often violent protests, though others were
killed by tank fire or air strikes.

Two Israelis, including a soldier shot along the border, have died. Israel accuses Hamas of orchestrating the protests and using them as cover for attacks.