100pc power supply to Rajshahi zone by next June 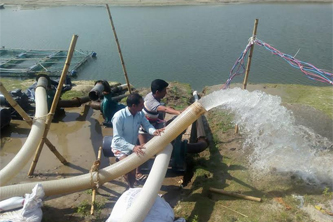 Rajshahi zone of Bangladesh Rural Electrification Board (REB) is going to attain the target of 100 percent
power supply to all its 30 upazilas by next June.

“We have already brought 28 upazilas under the coverage of hundred percent
power supply in this zone,” said Enamul Haque, superintending engineer
(current-charge) of REB, Rajshahi zone.

He says target has been set to bring the rest Shingra upazila in Natore
district and Bagmara in Rajshahi district under the power supply coverage by
March and June respectively.

All the officials and staff concerned have adopted diversified measures to
attain the target within the stipulated time. They are also carrying out
various campaign programmes among members of the public.

The field level workers are indentifying the dwelling houses and
commercial establishments still having no power supply and working
relentlessly to bring those under electricity coverage.

Engineer Enamul Haque said 13,833-kilometer line, 43,543 transformers and
20 substations were commissioned till December last. Work on installation of
20 other substations is progressing fast at present.

Mijanur Rahman, a farmer of Krishnapur village under Tanore upazila, said
the rural farmers are cultivating Boro rice and other crops using power-
driven irrigation pumps round the year.

He says many rural people have set up a small-scale engineering and
welding workshop and other businesses establishments everywhere in the rural
areas using electricity.

Mojibur Rahman, chairman of Gogram Union Parishad under Godagari upazila,
said many of the high and middleclass village people are now seen using
modern appliances like air-conditioner, gizzard, rice-cooker and micro-woven
in their houses after getting power supply.

Engineer Enamul Haque said power supply is indispensable and there is no
alternative of it for elevating the living and livelihood condition of the
people in general besides upholding the country’s development and production.

For this reason, he said, the present government has attached highest
priority to the sector and has been implementing massive and effective
projects.

The REB is playing a vital role in agricultural, industrial and socio-
economic development of the region through providing power services, he
added.