Serbia deal possible in 2019, but no border changes: Kosovo PM 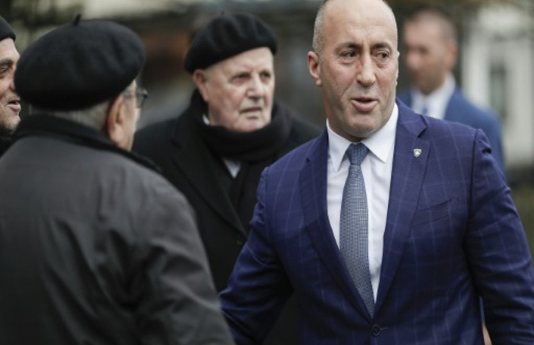 A deal between Serbia and Kosovo is possible this year but cannot include border changes, Kosovo’s premier Ramush Haradinaj told AFP in an interview, warning that territory swaps could revive old demons in the war-scarred Balkans.

The idea that Serbia and Kosovo — a former southern province that broke
away in a guerrilla war – might end their long-running dispute through a land
swap generated buzz last year after their two presidents suggested a trade
could be on the table.

But the proposal was shot down by a firestorm of criticism from rights
groups as well as Prime Minister Haradinaj, who is fiercely against ceding
any ground to Serbia.

Since then, the EU-brokered talks between the two presidents have come to a
halt.

Speaking to AFP from his office in Pristina, Haradinaj said he believed a
deal was still within reach, “possible even this year”, but that he would not
budge on the land swap issue.

“To open the discussion on territories and borders is to open up the past,
and the past was tragic,” said Haradinaj, a former guerrilla commander in
Kosovo’s independence war.

Borders “were the subject of the past wars”, he added, referring in part to
the 1998-99 separatist conflict that effectively split Kosovo, an ethnic
Albanian majority province, away from Serbia.

More than 13,000 were killed in the war, overwhelmingly ethnic Albanians.

Altering borders again would be “dangerous” and “does not bring us close to
an agreement, it takes us away from it”, he added.

Haradinaj’s strong opposition to border changes publicly pits him against
President Hashim Thaci, who is taking part in the EU-led talks with his
Serbian counterpart Aleksandar Vucic.

Though neither president fully explained the proposal, local media and
analysts assumed it would see a Serb-dominated part of northern Kosovo
exchanged for a mainly ethnic Albanian sliver of Serbia.

The prospect of further redrawing of the region along ethnic lines — one
outcome of the 1990s wars — ignited strong criticism from rights groups.

However Western diplomats, particularly the US, appeared far more open to
the proposal than in the past, when redrawing Balkan borders was considered
taboo after Yugoslavia’s bloody collapse.

Haradinaj says he is eager for talks to start again.

But another key obstacle is the 100 percent tariff his government slapped
on Serbian goods in November, sending relations into a nosedive.

On Friday the US reiterated its demand that the tariff be lifted
immediately.

Haradinaj told AFP the tariff was a response to the “arrogance” of Serbian
officials who he accuses of sabotaging Pristina’s attempts to join the global
police organisation Interpol last year.

Belgrade has long campaigned to shut Kosovo out of international
organisations, including the UN.

While Haradinaj initially said the tariff would not be lifted until
Belgrade recognised Kosovo, he has since softened his position, saying he
would remove it if efforts were made in good faith to restart the dialogue.

If the talks “become serious … if there is a conference … where
everything is prepared to get somewhere, we will give a chance to the
process”, he told AFP.

But if Serbia says it will never recognise Kosovo, “my answer is ‘we will
never remove’” the tariff, he added.

That will come as unwelcome news to the 120,000 Serb minority in Kosovo,
who have protested against the customs tax and remain loyal to Belgrade,
unwilling to accept Pristina’s authority.

In response to their resistance, Haradinaj said: “we do not force them, we have time”. “They are Serbs and they live as Serbs, and their values are respected,” he added.