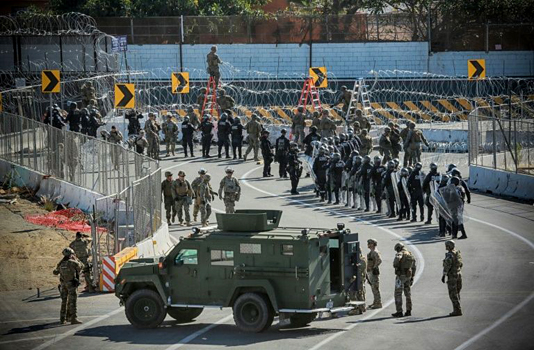 The United States has delayed its plan to send asylum seekers back to Mexico while their claims are processed,
as the Mexican government said Friday it “disagrees” with the policy.

US and Mexican officials had said President Donald Trump’s controversial
“Remain in Mexico” policy would be put into effect Friday at noon with the
return of 20 Central Americans at the San Ysidro border crossing between San
Diego, California and the Mexican city of Tijuana.

However, no asylum seekers had been sent back by Friday evening, said an
AFP correspondent at the border, and Mexican authorities said the program had
been delayed.

A Mexican immigration official in Tijuana, speaking on condition of
anonymity, said the first returns had been pushed back, possibly to Monday or
later.

“These are migrants who have a court date with a judge (to seek asylum),
which means US authorities have accepted that their lives could actually be
in danger. If anything happens to them in Mexico, their families could sue
the US government for failing to protect them.”

Earlier, foreign ministry spokesman Roberto Velasco said the Mexican
government was not happy with the new policy, but would accept the migrants
for “humanitarian” reasons.

“The Mexican government disagrees with the unilateral measure implemented
by the United States government. However… we reiterate our commitment to
migrants and human rights,” Velasco told a news conference.

Mexico will give returnees humanitarian visas that allow them to stay in
the country temporarily while they await their court dates in the US, he
said.

The US plans to continue presenting 20 people a day at San Ysidro, and
eventually extend the policy to other points along the 3,145-kilometer
(2,000-mile) border, Velasco said.

Announced last year, the policy is meant to stop what Trump calls “catch
and release” — allowing migrants who cross the border without papers and
claim asylum to leave detention and remain in the United States while their
cases are processed.

The US Department of Homeland Security says it is facing a “humanitarian
and security crisis” on the southern border, caused by a broken immigration
system “exploited by smugglers, traffickers, and those who have no legal
right to remain in the United States.”

It says at least 80 percent of asylum claims are without merit — mostly
by poor refugees from violence-wracked Honduras, Guatemala and El Salvador.

Many of them never show up for their court hearings, department officials
say.

The system is badly backlogged, with 800,000 asylum requests currently
pending.

But the “Remain in Mexico” plan — which Homeland Security has since
rebranded the “Migrant Protection Protocols” — has been sharply criticized
by opponents on both sides of the border.

Migrants have been tortured, raped and killed in Mexico’s often violent
border regions, and the new policy violates the right of people whose lives
are genuinely at risk to seek asylum in the US, activists say.

The new policy “is not only unlawful but could lead to dire and
catastrophic consequences for those who are seeking to access the asylum
process in the United States, a right which is enshrined in both domestic and
international law,” Katie Shepherd, a lawyer at the American Immigration
Council, told AFP.

Authorities in Tijuana said the returnees would initially be housed in a
government-run shelter.

Mexico will not accept unaccompanied minors, people with health problems
or those who have appealed a rejected asylum claim, said Velasco.

The policy limbo came as Trump announced a deal to reopen the US government after a record five-week shutdown triggered by his fight with Congress over funding for a border wall, which he says is the only way to stop illegal immigration. The deal with opposition Democrats does not include funding for the wall.