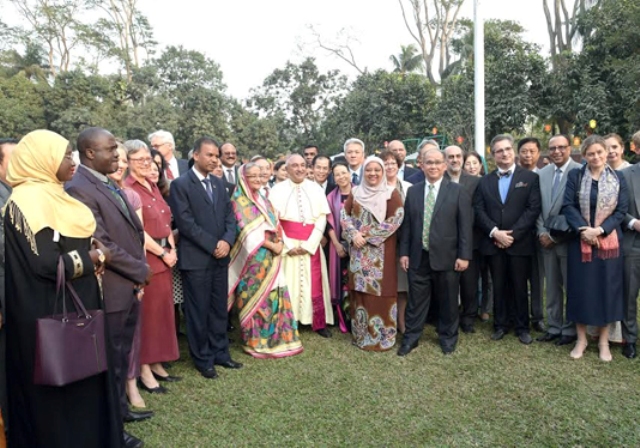 Prime Minister Sheikh Hasina today hosted a tea party at Ganabhaban in honour of foreign diplomats and heads of different missions and representatives of international organisations.

She hosted the tea party for them at the South Lawn of Ganabhaban, the official residence of the prime minister, here this afternoon.

The prime minister arrived at the venue at 4:10 pm and exchanged pleasantries with the ambassadors, high commissioners and charge d’affaires of 48 countries as well as the heads of the missions and representatives of international organisations in Bangladesh.

She talked to the diplomats, heads of missions and representatives of the international bodies and enquired about their well being.

The diplomats earlier greeted the premier by presenting her with bouquets separately.

The lash green South Lawn of Ganabhaban was tastefully decorated with kure ghar, madur (mat), mora and earthen pots and while patriotic songs were played on the occasion.